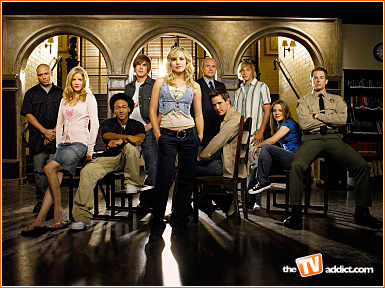 TV’s coolest chick is ready to fight for viewers!

But more than anything else, the MARS mastermind seems like the biggest cheerleader for the merging of his former network UPN with CW. “The WB was the network where teenagers went,” he explains. “Now that we’re on the CW, I feel like we’re finally on the right network. As long as we hold most of the GILMORE GIRLS audience, we’ll be successful. That’s what we need to accomplish this year.”

In preparing for the third season — which launches on Tuesday, October 3rd and 9 p.m. EST — Thomas has looked at what worked in the past… as well as what didn’t. “In a roomful of writers, the tough thing is that we are so completely immersed in the show that sometimes it’s hard to know what isn’t landing for fans,” he admits. “I certainly would acknowledge that we were too complicated last year. But there was a method to our madness!”

Detours Ahead
During season one, he says, “We almost worked poor Kristen Bell (Veronica) into the ground! She was in every scene and she did publicity non-stop. So one of the goals for season two was to give her a little bit of time off. At least a day per episode, just so she could relax and come to work happy and healthy, honestly.”

With that in mind, the second season focused on two mysteries: Who caused a bus filled with teens to plunge over the edge of a cliff? And exactly what happened the night of Logan and Weevil’s deadly confrontation?

“The downside of playing two concurrent, year-long mysteries that overlapped in some places is that we created 20 character that you sort of needed to know,” Thomas says, admitting that a casual or new viewer could easily become lost.

But don’t expect all of those characters to suddenly vanish from the canvas when the third season begins. “I love both Liam Fitzpatrick [played by Rodney Rowland] and Danny Boyd [played by Taylor Sheridan], and I expect to see a little bit of them this year,” Thomas teases.

Less Is More
The scribe is also excited about the new format which should prove both viewer and writer friendly! Instead of a single, season-long case to crack, viewers will have three different mysteries — lasting 9, 7 and six episodes, respectively — over the course of the season. “There won’t be a concurrent, parallel mystery,” Thomas elaborates. “With the [shorter storyline arcs], it doesn’t have to have a cast of 100. You can have four or five suspects and feel like it’s fleshed out. We won’t have the same confusion this year.”

What there will be is a rather clever shout-out to the Sci Fi Channel hit BATTLESTAR GALACTICA. Thomas explains that during an early scene, Veronica learns a new word from her resident advisor. “She asks him a question and then he says, ‘Frack!’” For those not in the know, that’s science-fiction speak for another f-word which can’t be said on television. “Veronica is like, ‘Huh?’ and the R.A. says, ‘I guess there are no BATTLESTAR fans out here?’” By the end of the episode, the hip heroine is swearing like a viper pilot.

Pushed for info on the season’s best kept secrets, Thomas finally spills the beans regarding the third mystery of the season. “What I’ve been dying to do…” he says before offering up the tantalizing tidbits which we’d share, if we could. But the Fitzpatrick boys would no doubt break our neck, so instead, you’ll just have to stay tuned…