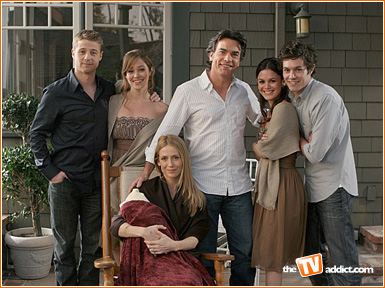 With THE OC coming to a close tomorrow night at 9PM on FOX, we at theTVaddict.com thought we’d offer up some of our favourite OC quotes. So here it goes, and if we’ve forgotten anything, feel free to add it in the comments below.

“Welcome to the O.C., bitch. This is how it’s done in Orange County.”
– Luke, after pummeling Ryan.

“God! Dad, those eyebrows are out of control!”
– Seth, eyeballing his dad’s work ID card.

“Open your mind here, Dad. This isn’t me we’re talking about. With Ryan here, we have a chance to have a real athlete in the family. Somebody to achieve all that your Jewishness has prevented me from accomplishing. Hey, I always wanted to play soccer.”
– Seth, helping Sandy find an after-school activity for Ryan.

“Allow me to elaborate. See, for my father here, a poor, struggling Jew growing up in the Bronx, well, Christmas meant Chinese food and a movie. And for my mom over here, Waspy McWasp, well, it meant a tree, it meant stockings and all the trimmings.”
– Seth, explaining the genesis of Chrismukkah.

“But before I tell you, you gotta promise that you’re not gonna go old-school Ryan Atwood on me?”
– Seth, making Ryan promise before telling him what really happened between Marissa and Trey.

“Prom night? I stayed home and sketched Ewoks.”
– George Lucas, in response to Seth asking whether he went to his prom.

“The Siegfrieds donated a pool and a field house last year and their son only smoked pot. Our daughter shot someone. We have to at least give them a hundred grand.”
– Julie, responding to Jimmy’s offer to give Harbor two, maybe three thousand dollars.

“She’s the Karl Rove of our school.”
– Summer, referring to the manipulative Taylor Townsend.

“Listen up, Tommy Lee. You’re just the latest in a series of experiments my daughter likes to make when acting out. So enjoy it because right here, right now is as good as it gets for you. Soon, Marissa is going to wake up and realize she is so much better than you and your life.”
– Julie, patiently breaking life down for Volchok.

“We call ourselves The Newpsieweds. Can you even handle how cute that is?”
– Holly, succinctly summing up why most people hate Newport Beach.