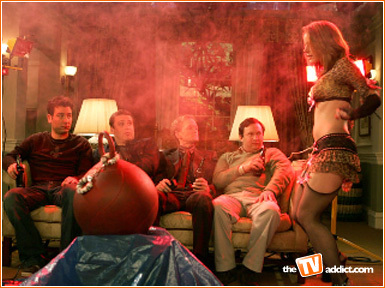 Hoping to replicate the success of Robin Sparkles [months later, the video’s still hilarious!], the brilliant minds behind HOW I MET YOUR MOTHER have planned another viral video treat — this time revolving around Marshall’s bachelor party.

Following tonight’s episode, head on over to the official HOW I MET YOUR MOTHER MySpace page to view scenes from Marshall’s bachelor party that were deemed too ‘racy’ by the network censors.

Why more video fun? Well in an interview with the New York Times, creators Carter Bays and Craig Thomas explained that, “We’re more like an NBC Thursday night comedy… but we happen to be on CBS. So how do we let young people know about our show if they’re not watching the other shows on the network?”

For a preview of tonight’s episode, click here and be sure to tune into HOW I MET YOUR MOTHER tonight at 8PM on CBS. For some inexplicable reason, the show is ‘on the bubble’ because let’s face it — the majority of American’s prefer the generic (read: unfunny) humour of Charlie Sheen on TWO AND A HALF MEN. Sadly it seems, fart jokes never get old.

UPDATE: You can check out The Bachelor Party that was TOO HOT FOR TV!!! by clicking here.