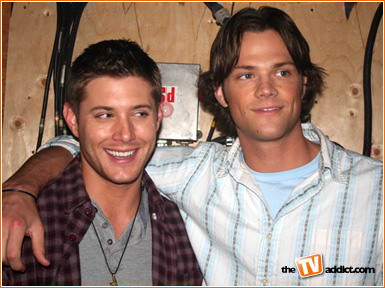 When you’re walking onto the set of the CW’s spookfest SUPERNATURAL, you can’t help but have the Boy Scout motto – Be prepared! – ringing in your ears. Yet, as I slipped into my role as a seasoned television reporter and stepped onto the soundstage to watch the filming of an actual scene between stars Jared Padalecki and Jensen Ackles, I’d have to admit that my “play it cool” veneer probably did a pretty poor job of hiding the excitement radiating from just about every pore of my being.

There they sat at an ordinary kitchen table, Sam and Dean (Padalecki and Ackles, respectively) discussing recent events. While I’m not at liberty to reveal the topic of their conversation, suffice it to say that tempers were flaring. As voices raised, so to did emotions. Dean was, of course, in protective mode, while Sam did what he does best: bristled.

And then things took a most unexpected turn.

Sam and Dean gazed lovingly – dare I say longingly? – into one anothers eyes. Standing, Dean moved closer to Sam, raising his arm and reaching out as if to touch him softly, when suddenly…

“Cut!” yelled the director. “Okay, boys, now let’s do it seriously this time,” he said, no doubt relegating any footage which might bring to life some of the more lurid fan fiction lurking on the internet to the cutting room floor. (Or, perhaps, if we’re lucky, a future DVD blooper reel!) The talented thespians had, in fact, been ad-libbing a scene while the behind-the-scenes crew worked out the all-important details involving camera angles, lighting and sound. And given the emotionally-charged nature of the two-part season finale, bringing a little laughter to the set is definitely a good thing. 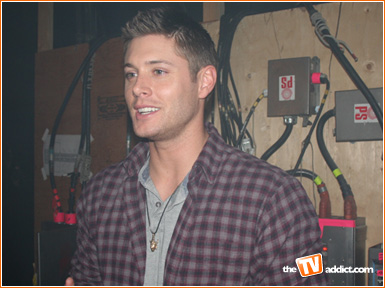 “I had some pretty heavy stuff last night,” admits Ackles between takes. Probably the most emotional stuff that’s been jam-packed into one scene. I was pretty done by the end of the day.” And what of his on-screen brother? “Jared had it easy, just lying there with his eyes closed. Jerk!”

Obviously, the lighthearted banter and genuine affection that bonds the Winchester brothers also exists between their portrayers. As the actors exchange compliments, it quickly becomes clear that the young men – both of whom grew up in Texas – have formed a mutual admiration society forged on the set but cemented in genuine affection.

Given how frequently one hears about backstage discord (DESPERATE HOUSEWIVES, anyone?) and co-stars who aren’t likely to pal around after hours (see: GREY’S ANATOMY), the fact that Ackles and Padalecki actually enjoy working together is a major plus… especially since they spend about 10 months of the year putting in 16 hour days on a surprisingly small soundstage.

“We definitely know how fortunate it is — the chance to work with someone who you get along with,” admits SMALLVILLE grad Ackles. “We’ve both been on shows and on projects where not everyone gets along, where somebody’s got a temper or an ego, but we’ve been very lucky and appreciative of the fact that we get along very well on and off set.”

Former GILMORE GIRLS guy Padalecki concurs. “We both – I mean, I say this all the time – we have similar interests and similar hobbies and similar manners. I’ve definitely worked with my share of people who – and I know Jensen has as well – but it’s all about drama. Like, if there’s not some sort of conflict going on in their lives or on set, then they’re just not happy.”

Okay, I’ll admit that I was dying to know which of their former co-stars were being dissed, but being the professional that I am – and with all of you SUPERNATURAL fans in mind, I focused on what was of utmost important: Spoilers! (If you don’t want to know what’s going to happen in the weeks to come, skip the following paragraph. Consider yourself warned!)

“This is the big show,” revealed Ackles of the much-anticipated season finale. “This is what we’ve been building toward for two seasons. All the problems that set the entire show in motion are culminating in this one episode.” Ackles says that grateful fans have one person to thank for not only the episode, but the overall direction of the show: creator Eric Kripke. “He doesn’t like to keep those long, drawn-out storylines with loose ends. He likes to tie things up and create new problems, which I really like. There are a lot of shows out there that kind of continually roll on, never solving problems.” But that’s not the case with SUPERNATURAL, as will be proven in the finale. “In this episode, we’re going to deal with the demon that took the Winchester brothers’ mom; We’re going to deal with their dad’s death; we’re going to deal with making deals with the devil.” But wait, there’s more! “We’re going to deal with Bobby, Ellen, Jo and the people in the roadhouse. We’re going to deal with the occult and devil’s traps and all of the stuff that’s been playing out over the season. It’s all coming together in this episode.” As if realizing that the episode is beginning to sound more “final” than “season finale,” Ackles quickly sets us straight. “That’s not to say everything is wrapped up, because in wrapping up that storyline, so much else is created which is really cool. It’s definitely going to give us somewhere to go for season three and however long we go!”

As a courtesy to theTVaddict.com, please do not reproduce or copy this article in any newsgroup, forum, livejournal, blog etc. Please DO feel free to link to the article directly.