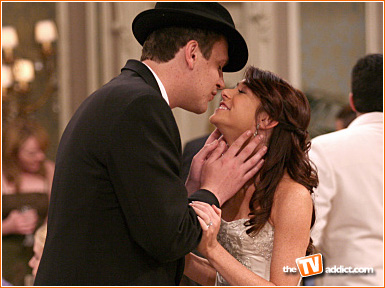 A likable cast, funny story-lines and great writing — what else does CBS expect from their sophomore comedy HOW I MET YOUR MOTHER? Apparently, a larger audience.

With the end of the 06/07 television season fast approaching, the show The New York Observer deemed “The Best Show You’re Not Watching.” inexplicably finds itself on the bubble for a third season renewal. In a desperate attempt to get you to tune in, Jenny (of Jenny’s Week in TV fame) has kindly taken the time to offer up a sneak peak at the two-part season (hopefully not series!) finale. 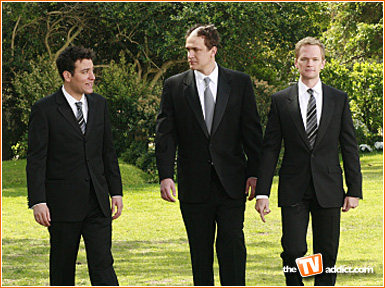 I was lucky enough to be sent the last two episodes for this season of HOW I MET YOUR MOTHER. “Something Borrowed” will air on Monday, May 7th and “Something Blue” will air on Monday, May 15th. Everyone knows that this season especially has been leading up to Marshall & Lily tying the knot, so I was anxious to see if it would actually happen and see all the events leading up to it!

Throughout “Something Borrowed”, we hear the vision of Lily’s perfect wedding and piece by piece, it’s changed. Lily keeps up a positive attitude throughout the entire thing, even when everything seems to go completely wrong on the big day. Barney is up to all his old tricks and begins to hit on every woman there, including a very, VERY pregnant harp player, and Marshall gets his hair done and it doesn’t turn out exactly like he or Lily want it to. The actual ceremony is gorgeous and totally unexpected but completely in line with what I feel about the show: funny, sweet and never fails to make me giggle.

“Something Blue” is all about the reception and a huge secret that Ted and Robin are hiding. Barney finds out they have a secret and speculates on what it could be, but when he learns what it is, it even shocks him. Again, we see more flashbacks to the weeks leading up to the wedding and the planning that went into the wedding day. This episode, the season (hopefully not series!) finale, was much, much more about Ted and Robin, even though it was taking place at Marshall & Lily’s reception. I won’t spoil the secret, but I will just tell you that it leads Barney to speaking Spanish and I thought I had guessed the secret but when it was finally revealed, even *I* was shocked!

If you are a fan of How I Met Your Mother, you definitely can not miss these last two episodes. But if this is a series finale, you will be crushed and left with questions, so cross your fingers! Be sure and watch on May 7th and May 15th to see these terrific episodes.