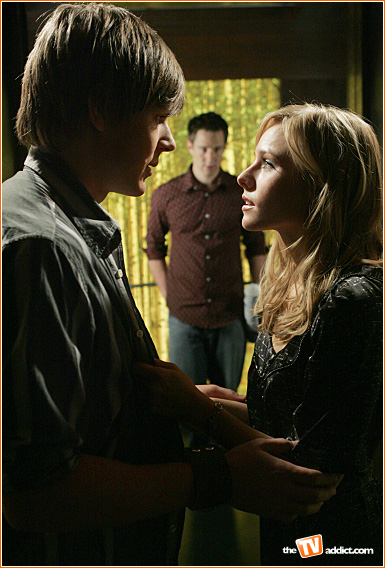 Neptune’s hardest working detective returned from extended vacation last night and this TV Addict could not have been happier with the results. When we last left Veronica she was alone, a little bitter and not nearly as happy as one would imagine having just solved the Dean O’Dell murder mystery. Who knew all she needed was some time off?

Last night’s opening scene marked the returned of a rested and seemingly happy
Veronica. Does anyone else prefer Veronica and Logan ‘friend edition’ over the run-its-course Veronica and Logan ‘angst-ridden-suspicious-zero-fun’ relationship edition? I’ll take witty banter over Veronica secretly stalking Logan to see if he’s cheating on her any day.

That said, what also made last night’s episode so successful was the return of Veronica’s friends. Remember Mac? Wallace? Dick? Anyone? Veronica used to have friends… (hence the theme song, we used to be friends…) until they pretty much disappeared throughout most of this season.

Last night the gang was back and love’em or loathe’em — Piz, Parker, Dick, Mac and Wallace all played an integral role in adding to the enjoyment of the episode. Mac and Max — a match made in Geek heaven. Piz and Veronica — I’m going to hold off judgement and see where this is going (talk about the diplomatic way out!). Dick — oh what can I say about Dick? Not only was his MySpace dating scheme hilarious, Dick more importantly continues to be a fantastic foil for Veronica. Add Dick to Veronica (how dirty is this sounding?) and you’re guaranteed some classic Mars one-liners like this one, “Things I’d rather do than attend this party solo: Seven minutes in heaven with Scott Peterson; Ride the space elevator with Dick.”

Finally, it wouldn’t be a proper MARS wrap-up without mentioning Keith Mars and his new role as the head honcho, or Sheriff as he prefers to be called. I absolutely loved Keith’s story. Not only was it great to see actor Enrico Colantoni do something substantial (aside from just being Veronica’s Dad), I think firing half of the department will definitely make for some great new story-lines assuming MARS gets picked up for a fourth season. I imagine there are now a bunch of really unhappy ex-sheriff’s with a lot of time on their hand to plan their revenge!

In the end, Rob Thomas delivered on his promise to re-invigorate the show. Not only was last night’s MARS a return to form, it proved that college Veronica with stand alone mysteries can not just work, but work well. Needless to say, come the CW upfronts on May 17, Dawn Ostroff’s decision just got an awful lot harder.