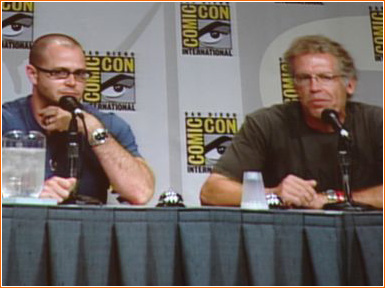 3:36PM: Sitting in Ballroom 20 waiting for the LOST panel to start. Bad news, I’ve got an hour and twenty minutes to go. Worse news, the surrounding Comic Con attendees have yet to discover deodorant. Stay Tuned..

5:12PM: Boy the announcer is on a power trip, she really doesn’t shut up. Panel starting in minutes….

5:19PM: The panel is starting and thankfully some very cool LOSTies have found their way off the island. Joining us on stage are showrunners Damon Lindeloff and Carlton Cuse (both are wearing pants).

5:26PM: Lindeloff and Cuse have brought along a bell to ring whenever they feel the other one is about to go overboard in terms of spoilers. To quote Homer Simpson, “D’OH!”

5:30PM: Lindeloff and Cuse are asked about the writing process… SNOORE! To sum up, all writers contribute, yet in the end, Lindeloff and Cuse have the final say. Great waste of five minutes fanboy. Here’s hoping the rest of the event’s questions are better [they are!]

5:35PM Fan question: Where’s Michael??? As announced yesterday at those pesky TCA’s… Harold Perrineau will be back this season. Way too ruin the fun so-called TV critics!

5:36PM: Cuse and Lindeloff promise MORE FLASH FORWARD scenes in future episodes. Cuse says: “Going forward, the show will feature flashbacks and flash forwards.” Lindeloff: “But how forward and with whom — the audience will be pleasantly surprised.”

5:48PM: As the room erupts in applause, Harold Perrineau walks on stage… “Man I missed you all, I’m really excited to go back to Hawaii and hang out with all my friends.” Yes, shooting LOST in Hawaii pretty much sounds like the world’s greatest job. Needless to say, this TV Addict’s jealous.

5:54PM: Lindeloff: “A benefit of doing only sixteen episodes, we can do more mobisodes, more of the LOST experience, book tie-ins”… Great, more money for fans to shell out!

5:59PM: Fan asks about Nestor Carbonell returning (he’s starring this fall on a new CBS show called CANE)… The fan is a little too obsessed with Carbonell… I think he may be his brother.

6:02PM: Fan asks about Libby. Cuse: “It is our intention to get to Libby’s story this year. We think you’ll all be happy with the outcome.” Lindeloff: “You’re not barking up the wrong tree with your questions (ie. Libby may work with/for Dharma)”

6:03: Will Rosseau be getting a flashback? Cuse: “This season or next.” Lindeloff: “There are important plots that have to be….” (Cuse rings the bell!)

6:07PM: Boring fan question about the Monster…. Pointless rambling… blah blah blah… Lindeloff: “The monster will be definitively answered… eventually. Cuse: Not every answer will be answered at the end of the show, we promise, not 10 seconds of blank tape.” Lindeloff: “20 seconds!”