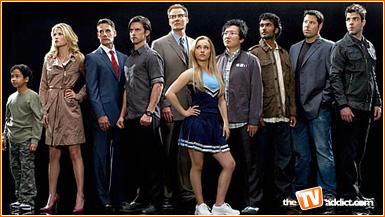 In response to yesterday’s post entitled, “HEROES: Most OverHyped Show Ever?”, reader Josh wrote, “Why do you feel the need to constantly be negative when it comes to Heroes? Here’s an idea: quit worrying about how the show’s second season will or won’t turn out and just watch. I just don’t understand why people feel the need to be so critical, even before the season begins.”

First off, let me say right off the bat — this TV Addict cannot wait for HEROES to return. The stunt casting of Kristen Bell (VERONICA MARS), David Anders (ALIAS) and Nichelle Nichols (STAR TREK) almost makes up for season one’s lackluster finale. There’s no denying the fact that Tim Kring and Co. have done a phenomenal job of building the anticipation for season two all summer long.

NBC on the other hand is playing a dangerous game by taking their one modest hit from last season and passing it off as a ratings juggernaut. In a recent press release, NBC states, “HEROES will Celebrate Its Extraordinary Domestic and International Success by Sending Cast to Seven Cities to Promote the August 28 DVD and HD DVD Release of “Heroes Season One” and the Beginning of Its Second Season,” Since when does an average of 14.3 million viewers qualify as an extraordinary success? In fact, at the end of last season, HEROES didn’t even rank as one of the year’s top twenty shows. Not very heroic, getting beaten by Charlie Sheen and Jon Cryer.

The other factor quickly pushing HEROES towards the edge of over-saturation is NBC’s merchandising department. Is there really a need for HEROES clothing, trading cards and video games? How many more months until we get the Matt Parkman doll? I give it six!

Look, I understand the need to make money and promote the show. No doubt HEROES — with it’s ballooning cast of thousands — isn’t cheap to produce. But one can’t help but wonder. What’s NBC and Tim Kring really focusing on — the story-line for season two, or the upcoming launch of their Masi Oka line of bobble-heads?