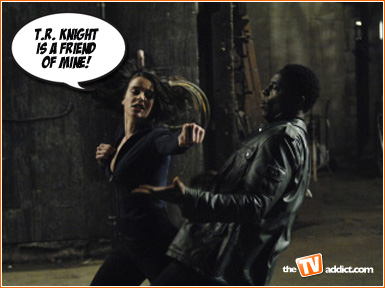 It’s time for everbody’s favorite game show — “Fun with Photos!” Here’s how you play. Take a look at the just released photo of Isaiah Washington’s guest stint on BIONIC WOMAN. Think of a caption. Post way in the comments. Yes folks, it’s that easy.

In all seriousness though. We’re happy to see Isaiah Washington is getting a second chance to redeem himself. Everyone makes mistakes and last season’s GREY’S ANATOMY misstep shouldn’t automatically destroy the man’s career.

Here’s hoping he’s learned his lesson and more importantly that others learn from what he went through. Intolerance of any kind won’t to be tolerated — and if you’re ignorant enough to think it is — well, NBC’s going to send the BIONIC WOMAN to kick your butt.

Thanks to TV with MeeVee for the Tip!