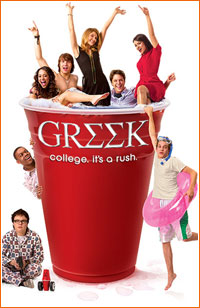 With new TV scarcer than answers on LOST, you’re probably wondering how this TV Addict has been occupying his time since well, Thursday’s phenomenal GREY’S ANATOMY two hour season finale. Truth be told, it hasn’t been easy. But in between panic attacks, hours spent curled up in the fetal position crying and calculating the number of days until the start of the new Fall season, this TV Addict is managing.

How exactly? Here are few tips.

MOVIES: They’re like TV shows, only more expensive and on bigger screens. Recent recommendations include INDIANA JONES, IRON MAN and SON OF RAMBOW.

CABLE: Sure things look bleak now, but new seasons of MAD MEN, WEEDS, ARMY WIVES and THE SECRET DIARY OF A CALL GIRL are just around the corner.

GREEK: Having finally tired of being told by virtually everyone that I, “like totally must watch GREEK” this TV Addict caved and downloaded the first three episodes via iTunes. And while I’m the first to admit that it’s quite possible I’m simply too old to be watching a show aimed at High School/University students — Holy Parent’s Television Council Batman — this TV Addict cannot believe what GREEK is getting away with on a channel with ‘Family’ in the title. Don’t get me wrong, I’m loving the show, but I certainly would not feel comfortable watching it with my family. I mean I’m still recovering from the time my Dad walked in on me watching AMERICAN PIE during the now infamous Apple Pie scene!

THE OUTDOORS: Now I know what you’re thinking. Nature, fresh air, physical activity, overrated. But trust me, there are some things that can’t be replicated even if you did just recently purchase a Wii Fit and 50″ HD TV.

FOR CANADIAN EYES ONLY: Global has picked up USA’s IN PLAIN SIGHT and set the premiere for June 17. While CTV begins burning off the final season of GOSSIP GIRL this Friday May 30 at 9PM. Also look for the CTV Network premiere of MAD MEN on June 8 at 10PM and the start of CANADIAN IDOL’s sixth season on June 3 at 9PM.

Got a tip to share with theTVaddict.com readers on how to get through the ‘dark times?’ Feel free to post away in the comments below. Because we’re all in this together…