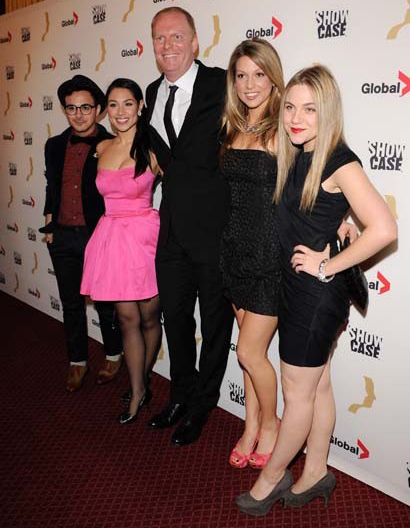 On Saturday November 13, Canada celebrated some of the best and brightest we have to offer the world of television at the 25th Annual Gemini Awards (Think: Canada’s Emmy equivalent). Hosted by GLEE’s Cory Monteith, we are not exaggerating when we say everybody who is anybody in the world of Canadian TV was there. Including, theTVaddict.com’s very own Melissa Girimonte (@thetelevixen on twitter) who, planted firmly on the red carpet had the enviable “job” of interviewing the likes of Nina Dobrev, Grace Park, the cast of ROOKIE BLUE, and more. Interviews we’ll be sharing all week in a series we’ve cleverly coined Gemini Gems.

Full disclosure: My inner 12 year old is freaking out right now because my March Break used to be spent inside a library watching DEGRASSI marathons. How does it feel to be part of such a legacy?
Stefan Brogren: It’s amazing. I think we feel lucky that we’ve had an opportunity to be around this long and I know that we also feel there are a lot more stories to tell. It’s funny, everytime we think that we’ve done it all something new comes along that is going on in a teen’s life that makes us think that we’ve got to stick around longer. There’s more stories to tell and as long as they want the stories, we’ll keep telling them.

What’s it been like transitioning from a child actor on the original series to acting, producing and directing on THE NEXT GENERATION.
It’s been interesting. I mean as a kid I didn’t even know if I really wanted to be an actor on TV. I really enjoyed it, but never imaged I’d make a career out of it. But these guys — [Producers] Linda [Schuyler] and Stephen [Stohn] have brought me in on the others side of the cameras as a producer and director — which is fantastic and something I’m really loving. If anything, being on the other side of the camera is a little more rewarding, a lot of fun and as an added bonus I get to give these awesome actors hell when they screw up! Sure, they don’t take me seriously, but it’s been great.

For us Zit Remedy fans, is there any chance of a reunion?
You know people have been trying, but I don’t think it’s going to happen. But you can always dream.

WIth the show celebrating 30 years, how often do you find mothers who grew up on the show come up to you and say how great it has been to be able to pass the series onto their children?
We get moms and their children coming up all the time saying, I’m making my kid watch the show because I grew up with it.” Of course, nowadays it’s a very different show, same heart but a lot flashier! But I think it’s great. Parents introduce it to kids, kids watch it with parents and if they’re watching it together, all the better.