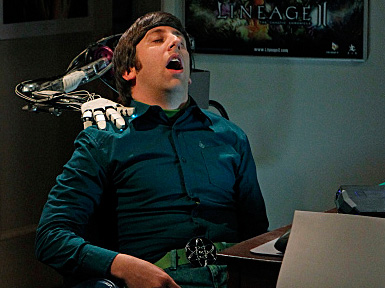 You’ve just received an $85,000 per episode raise for your hilarious work on THE BIG BANG THEORY, what are you going to do next? Well, before you answer with the obligatory jaunt to DisneyLand or the more synergistic trip to Warner Bros. own Wizarding World of Harry Potter™, may we humbly suggest firing your agent. No, really.

While a salary bump from roughly $40,000 to $125,000 per episode might seem like an acceptable increase in pay following THE BIG BANG THEORY’s phenomenally successful move to Thursday nights at 8PM, coupled with an almost unheard of syndication deal that will net your show’s producers (Warner Bros.) a cool 2 million dollars an episode, your co-stars (with the exception of Kunal Nayyar whose contract negotiation remains unresolved) all made off slightly better. And by slightly, we mean waaaaaaay better.

Suffice to say, the fact are these: While we certainly don’t begrudge Jim Parsons, this year’s Emmy Winner for Outstanding Actor in a Comedy a much-deserved bump in salary — which on the off chance you don’t follow Deadline Hollywood Daily — was reportedly worth a whopping $250,000 per episode, we can’t help but feel that at the very least, you should be earning equal pay to that of Johnny Galecki and Kaley Cuoco who also saw their salary bumped to 250k. Co-stars, that while both talented and exceptionally likeable, aren’t responsible for fitting into those skin-tight oxygen constricting jeans on a weekly basis, or forced to endure the humiliation that comes with getting ‘pleasured’ by an animatronic arm in front of 13 million viewers. We’re just saying’