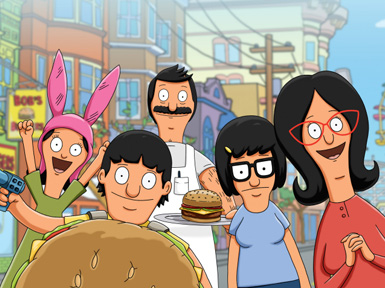 BOBS BURGERS
Premieres January 9th at 8:30PM on FOX (Global TV in Canada)
Tired of what FOX has been serving up on Sunday nights? Can’t fathom another helping of Seth MacFarlane? Have we got some good news for you. This Sunday January 9th at 8:30PM FOX is injecting an entirely different flavour to their Animation Domination lineup in the form of BOB’s BURGERS. Of course, like the first time one introduces any new food to the palette, BOB’S BURGERS — which as the title suggest revolves around Bob, his family and the burger shop they run in a nondescript costal town town — may be a slight shock to a system that was raised on steady diet of SIMPSONS and Seth MacFarlene. But, assuming you can get over the completely different tone and energy BOB brings to the table, there’s a very good chance you’ll be asking for seconds courtesy of a winning recipe of clever writing, surprisingly heartfelt moments, and a talented voice cast that includes the captivating Kristen Schaal. Grade: B-

SHAMELESS
Premieres January 9th at 10PM on Showtime (January 10th at 8PM on TMN in Canada)
What’s that you say? After WEEDS, NURSE JACKIE, THE UNITED STATE OF TARA and THE BIG C you have absolutely no room in your life for yet another series about a dark and dysfunctional family? Well, we’ve got two words for you: Make some! Because SHAMELESS, Showtime’s Americanized version of the smash UK series that follows the ups and downs of the Gallagher family is quite possibly the most enjoyable pilot we’ve seen all season. No really. Not only does Emmy Rossum absolutely steal the show as Fiona, the eldest daughter charged with keeping the family together while WIlliam H. Macey’s family patriarch Frank lies virtually comatose on the floor as a result of a drinking problem, the Gallagher siblings — with notable shout outs to eldest brothers Lip (Jeremy Allen White) and Ian (Cameron Monaghan) — help contribute to the most endearing collection of brothers and sisters to hit the small screen since ABC premiered MODERN FAMILY. Grade: A 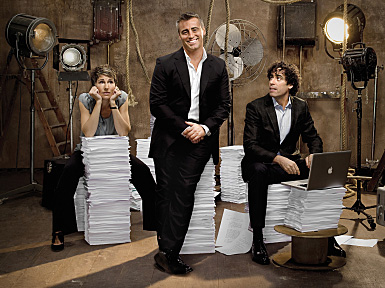 EPISODES
Premieres January 9th at 8:30PM on Showtime (January 10th at 9PM on TMN in Canada)
If your first reaction to discovering that an American Network plans on hiring hiring a BAFTA-winning comedy duo to recreate their UK smash for a US audience is a positive one, EPISODES may not be the show for you. But, if you immediately chortle at the mere notion of any Network executive thinking they can take the easy way out by simply importing a show from across the pond, Showtimes newest comedy has must-see-TV written all over it. Made all the more so thanks to phenomenal performances by the blissfully naive husband and wife writing duo played by Stephen Mangan and Tamsin Greig, a kooky collection of network executives that we pray-to-god aren’t based on the real thing, and of course Matt LeBlanc, who in playing a heightened version of himself already has us forgiving him for JOEY. Grade: B+ 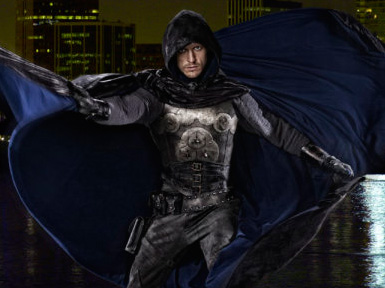 THE CAPE
Premieres January 9th at 9PM on NBC (CityTV in Canada)
Warning: If you’re tuning into THE CAPE with an expectation of seeing a small screen version of Christopher Nolan’s Dark Knight, or anything even remotely similar, NBC’s newest superhero series that tells the tale of an ex-cop (David Lyons) who takes on a superhero persona after being falsely accused of murder is most certainly not for you. That said, if you still look back fondly at the cheestacular awesomeness that was CBS’ short-lived THE FLASH, can forgive some clunky dialogue coupled with some predictable storytelling, and [most importantly] can make peace with the fact that in essence you’re watching a show about a very powerful clothing accessory, well, welcome to the club! GRADE: C