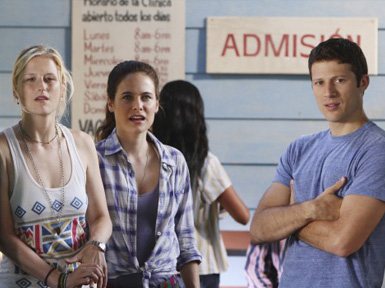 You’ve got to hand it to Shonda Rhimes: she goes for thematic, tonal, and soapy consistency between her shows. You get the sense that she has a very clear idea of what she wants her shows to look and feel like. Her latest project with Jenna Bans (who created the show with Rhimes serving as an executive producer), OFF THE MAP, is in keeping with her grander narrative of young, attractive doctors making cute, solving minor medical mysteries, and heavy emoting. If you already enjoy her other shows, GREY’S ANATOMY and PRIVATE PRACTICE, do not assume you’ll like OFF THE MAP – this show is plodding, disingenuous, and a waste of talent.

Somewhere in the jungle of an unnamed South American country (there’s vague references to “la ciudad de las estrellas,” or city of stars), a team of dedicated doctors provides the only health care for hundreds of miles in a rickety-looking clinic. Joining them are three young medical residents from the States looking for fresh starts and solace from their personal demons. Heading the clinic is the mysterious Dr. Ben Keeton (Martin Henderson), who imparts wisdom/marching orders to the new recruits, occasionally retreating to smolder while looking out into the distance.

Like its brethren, OFF THE MAP keeps its lead male characters just left off aloof, saving showier scenes for the female leads, namely WONDERFALLS’ Caroline Dhavernas, who plays Dr. Lily Brenner. The patients and the ailments they encounter are just uncommon enough for the show to get away with and are thinly-veiled metaphors about their doctor’s personal (often romantic) lives. When a widower, suffering from injuries sustained while his arm was caught in a zipline, is being helicoptered out of the jungle, a teary Dr. Benner insists that they ignore his life-threatening condition to spread his wife’s ashes in a lake. This whole series of events could have just led to an easy, cathartic sniffle (in fact, I would have preferred it), but as it is with Rhimes-brand shows, it’s all about the characters, in all the wrong ways: this man’s tragedy is only secondary to Dr. Brenner’s projections of her own turmoil, her own emotions, and her pathos. The show fails to convince otherwise and it makes Dr. Brenner seem like a self-involved creep.

This navel-gazing is the reason I stopped watching GREY’S ANATOMY after its first few seasons (though I recently checked in on the show and have cooled my boiling rage to a lukewarm simmer) and why I couldn’t even begin to engage with PRIVATE PRACTICE. Though this self-absorption is truly the weakest point, taken as wholes both of those shows function well as good-if-like-that-sort-of-thing guilty pleasures. Which is fine. We all have them. But is it so wrong of me to inch my expectations just a little higher for a third series? OFF THE MAP seems to have answered that with a resounding “yes,” being more of a third iteration of a product than something new altogether, doubling-down on its worst features (that scene I described above) and diluting its few good ones (the fine performances, occasionally great banter).

What the show wants to have going for it is its exotic locale and unique jungle medicine. The two episodes I screened for review did have some neat tricks in them: when the clinic runs out of a blood type, the docs use coconut milk as a substitute. But that’s about as exotic as this show about an isolated jungle clinic gets, apart from tropes like language barriers and weird foods. Its true conceit is its great cast, rendered boring and familiar: Mamie Gummer (who shows flashes of her mother Meryl Streep’s brilliance) plays an out-of-touch uptight, downer and FRIDAY NIGHT LIGHT’s fantastic Zach Gilford is a randy ex-bad boy. And Caroline Dhavernas continues to make me mourn the premature cancellation of WONDERFALLS and wish she had a character as enjoying to watch as her Jaye Tyler.

During a discussion panel at the annual Television Critics Association’s winter press tour, Rhimes got defensive when a reporter asked her if OFF THE MAP really was “GREY’S ANATOMY in the jungle.” She brushed the reporter off, saying that it’s “a show with her own voice in a unique location,” that it “isn’t GREY’S.” “For one thing, I’m not sure what an anesthesiologist would do in the jungle,” she told the room of critics. I bet it wouldn’t be as boring and annoying as this. Grade: D