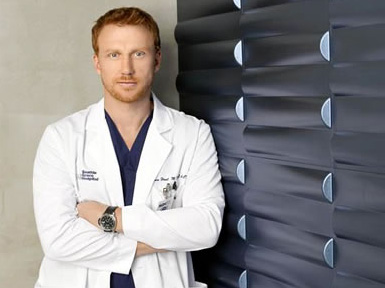 Riddle me this fellow TV Addicts: How is it possible for an actor to spend his entire day on set and yet rarely appear on screen? Easy, when the actor is directing! Such is the case when it comes to tonight’s episode of GREY’S ANATOMY that saw Kevin McKidd step behind the camera for the very first time. But where did this directing bug come from, what was the biggest challenge, and of course, what does the future hold for Owen and Cristina? We caught up with the multi-talented McKidd late last week to find out just that.

When did you catch the directing bug?
Kevin McKidd: Having had the opportunity to work with such great directors throughout my career (see: Danny Boyle, Irwin Winkler, Ridley Scott to name a few) directing was just always something I wanted to do. But I was busy as an actor, so when GREY’S ANATOMY afforded me the time, I took the opportunity to shadow many of our fantastic directors, get comfortable with the process, and eventually ask Shonda for a shot. And after sort of proving my stuff with last year’s webisodes which turned out alright, I was given tonight’s episode.

What was the most challenging aspect about directing the episode?
Making sure that I was as prepared as I could possibly be so that nothing would come from left of field as well as making sure I basically didn’t embarrass myself in front of my friends and family! That, and the OR stuff is always tricky because it’s very technical. All the operating stuff is hard because you have an idea in your head of how you want to shoot it but there might be a medical reason why a doctor can’t be in that spot and have to be over here right now because medically this is happening etc. So you have to roll with all of that and that’s quite tricky. Also, my episode if very interior and static. There are a lot of people talking in patient rooms and in OR’s so the challenge generally in my episode was to keep things moving and give the episode some energy and impulse.

One of the story-lines that really caught our eye as somewhat of a twitter addict (shameless plug @thetvaddict!) is tonight’s B-story that has Bailey becoming a quasi-twitter celebrity. Did you get the chance to chat with noted twitterholic Shonda Rhimes about her experience and do you twitter yourself?
No I’m not on Twitter, but I understand Shonda is very active on it so I imagine the writers must have a had a lot of fun writing that storyline. It’s a very funny storyline, Bailey basically becomes this huge Twitter star and what I think is fascinating actually is that this is all based on fact, as all our episodes are. Mark Wilding [the episode’s primary writer] studied that many big important surgeons tweet their major surgeries in real time because it’s an instant messaging service essentially. They can have followers who are usually medical students who want to be surgeons who actually follow the decision making process of a famous surgeon in real time. So as a learning tool it’s very popular and is happening right now, it’s not fake, and I found that information really interesting, that tweeting is a big deal in a surgical world.

And while we’re on the subject of twitter, Shonda Rhimes recently tweeted that the cast was starting to record their songs for the musical episode. What was your first reaction to learning that GREY’s would be doing a musical episode, and do you sing?
I do sing, and I actually have a solo! Over the years I’ve always wanted to do a musical, in fact I almost did and have worked with Andrew Lloyd Webber, Trevor Nunn and Des McAnuff over the years. It’s still on my list on my things to do but luckily I’ve been so busy as an actor on TV and film that I’ve not had the chance to take the time out to do a musical. So this for me was a joy and is a joy because I get to kind of scratch an itch that I don’t really get to do very often and it’s going to be a blast I think. It’s going to be a great episode. We’re in the middle of recording the songs right now, all the actors are in the middle of recording their final tracks which we’ve been working on for the past couple of months and we’re about to start filming. I think it’s going to be an interesting exciting one off, and I think it’s great in the seventh season we can start having some fun and sort of experimenting with the form with GREY’S ANATOMY.

Since Cristina found her way back to work, it’s been fairly quiet on the Owen and Cristina front which while nice, doesn’t always make for the most exciting of dramas. What can you tease about the future for the twosome as we head into the second half of the season?
I think they’re going to bang heads quite drastically about certain fundamental beliefs they have about life and marriage and about how they’re moving forward in their life together. You know they rushed into their marriage essentially and they are in love with one another but they don’t know certain things about each other, about what their beliefs are. So i think they’re going to be a lot of bumps in the road for them.