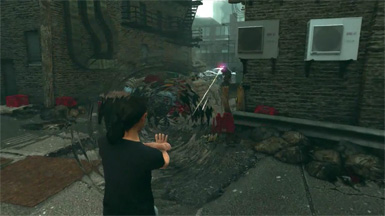 If you’ve spent your days and nights wishing for NBC to bring back Claire, Sylar, Peter and the rest of the HEROES for a fifth season, you may be waiting a very, very long wait. However, if all you miss is the premise that ordinary people can wield ultra-crazy super powers (along with Sprint cell phones), you may just get your fix in an upcoming video game from Phosphor Games called “Awakened.”

Judging by the trailer, it clearly draws its inspiration from NBC’s former hit (or the timing is ridiculously coincidental):

In fact, Awakened began as a project at Midway called Hero in 2006 (the same year HEROES hit the airwaves in case you were wondering), but was ultimately dropped when the studio declared bankruptcy and folded. Several employees found their way to Phosphor and began work on the title, but had to start from the ground up since Warner Bros took control of Midway’s assets, including Hero.

Given the incredible top-to-bottom fall of Tim Kring’s show, the team at Phosphor should be counting their lucky stars it didn’t get finished sooner. Had Midway never folded, that would have given Hero an approximate launch window between late 2008 and late 2009… right when the audience interested in HEROES started tuning out in droves. “Awakened” probably won’t be out for another year or two at best, which should give those interested in this concept ample time to get excited about exploring it once again.

Now that I think about it, I’d say a game where you get to be the super-powered hero sounds a lot better than watching the over-dramatic band of whiny super-freaks Kring dreamed up.

Satisfy your inner geek while fueling your TV addiction… TV Tech Fix is a column by Matt Whitlock, editor of the TechLore.com Consumer Electronics Community (plus several other gadget-focused community websites), and lover of both technology and TV. In this column, he’ll cover a wide variety of tech topics aimed squarely at the TV addicts of the world – from tips and tricks to help you better your TV experience, to gear recommendations, to the impact technology is having on the TV shows we love.