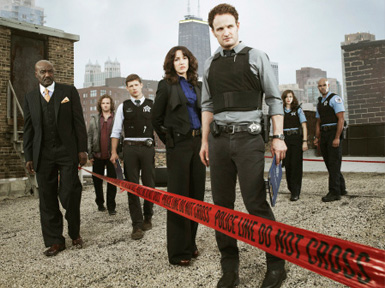 Shawn Ryan might be the most ambitious man in TV right now. THE SHIELD creator IS trying his hand at his unique flavor of crime drama on a decidedly vanilla front: network TV. To be fair, Fox has been known to roll the dice every now and then, and Ryan’s THE CHICAGO CODE, set against Windy City politics and police force, is definitely a gutsy play. The show has many of the same qualities that made his previous shows rich and enticing dramas (including great performances by Jason Clarke and Jennifer Beals), but its aspirations threaten to be too oversize for it to sustain. That said, I wish for nothing but for it to prove me wrong.

Teresa Colvin (Jennifer Beals) is the city’s first female police superintendent with big plans to take on the city’s corrupt government, scraping together an off-the-books team to link the long-rumored to be malevolent Alderman Gibbons (Delroy Lindo, perfectly capturing a “two-faced” politician) to dirty deals with crooks. She tasks her former partner, Jarek Wysocki (BROTHERHOOD’s Jason Clarke), a born and bred veteran police officer with an aversion to profanity (a wholly unconvincing characteristic that attempts to sidestep the stricter language rules of broadcast TV), to lead the investigation. Of course, nailing Gibbons proves harder than expected, his control, money, and influence extending far beyond his own district. If this attempt to crack down on institutionalized corruption sounds familiar, it should: this feels like Shawn Ryan trying to do a small scale, network TV version of THE WIRE.

Like David Simon’s Dickensian epic, THE CHICAGO CODE has a big, sprawling cast with their own individual story lines: a undercover cop is deep within the local drug trade, complete with its own cast of characters to numerous and undefined thus far for me to explain here; Wysocki’s niece Vonda (Devin Kelley) has joined the force to avenge her father’s (and Wysocki’s brother’s) murder, her partner an overconfident hotshot who makes Wysocki nervous; Good ‘ol boy and straight arrow Evers (FRIDAY NIGHT LIGHTS’ Matt Lauria), is trying his best to work up a rapport with his new partner, Wysocki; Teresa is coming up against upper-level bureaucracy, making enemies amongst the force who didn’t much want her in the position in the first place; Wysocki, besides passionately leading the Gibbons takedown campaign, is embroiled in a complicated relationship with his ex-wife and is determined to right his brother’s death; and not to mention the various  secondary characters who frequent the edges of scenes enough that you need to remember who they are.

To help, each character unpacks some unfortunately clunky exposition in narration, but the show nimbly moves from character to character, rightfully paying more attention to the better, more interesting ones: namely, the crackling back-and-forth between Wysocki and Teresa. Jason Clarke emits the wisdom and cynicism of Wysocki and remarkably resembles what an actual detective might look like, with nary a quaffed, pretty boy follicle. And Jennifer Beals, whose presence at first almost takes you too far out of the show, quickly reels you in, getting her Chicago accent down and convincingly making Teresa tough, smart, but always a little vulnerable. Together, they’re impossible not to watch – when you see them talking shop or planning their next move against Gibbons, there’s no doubt that these two are old partners with a long, storied history together.

The show employs a procedural-serialized plotting tactic – working so well on THE GOOD WIFE – that’s unevenly handled here: by trying to feature weekly crimes and unspooling the broader narrative arc of the Gibbons investigation, it simply packs too much into a single episode, crisscrossing between the two before either gets a real chance to come into focus. And for all its characters, few so far are beyond the standard cop drama fare – the sequences with Wysocki’s niece and her partner are often the dullest. I relent some disapproval again, because, and this is perhaps most frustrating, it gets some aspects just right: shot on location, it captures the textures and atmosphere of Chicago exceptionally. THE CHICAGO CODE has enough third-act surprises and great performances that it shouldn’t be discounted as a run-of-the-mill police procedural – in fact, it makes its very clearly that it doesn’t want to be your new LAW & ORDER. That said, Ryan is attempting a cable-thinking viewer’s network show that hasn’t quite come together yet. Grade: B-