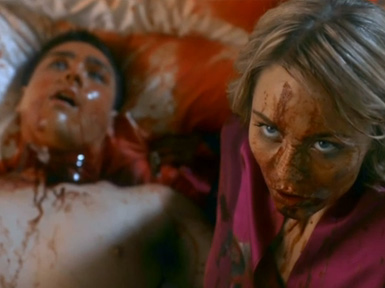 For decades the season finale of just about any television show is guaranteed to be a cliff-hanger.  Why? For the simple reason that television showrunners and writers are not confident that their audience will return when the show does.  They figure the best way to ensure that their existing audience is seated in front of their television is the cliff-hanger.

But here’s a small secret:  viewers hate cliff-hangers.  It presupposes that viewers won’t tune-in but for the cliff-hanger.  When, in reality, fans of a television show are more likely to tune-in regardless of the cliff-hanger.  That is why they are fans – they keep coming back.  Fans by their very nature are dedicated and committed.  They do not need to be toyed with and manipulated.

So in addition to making a viewer’s brain want to explode whenever they see the words “to be continued” or the episode ends without resolution to a major character’s status –cliff-hangers also do not even allow the viewer the small comfort of knowing that their favorite character will be returning; particularly as characters in jeopardy or on the brink of death are the preferred.

However, because this plot device has been utilized ad infinitum for years, fans have become a bit numb and unimpressed with cliff-hangers.  Such a device is more of an annoyance and it insults the very person that the show wishes to keep when the show returns.


In recent years, cliff-hangers also have another deadly side-effect:  if the show does not return, then fans are literally left hanging to wonder for eternity how things would have worked out.  Before the widespread use of the Internet, it was not even possible to find out what would have happened.  Today, through the use of fan sites, conventions, and Twitter, it is much easier for writers and showrunners to convey to fans the “what would have happened” had the show continued storylines.

But for the vast number of viewers who are not so “plugged in,” they will always wonder.  It is a bone-of-contention — the not knowing what would have come next.  It can rub away at the brain for years – becoming an increasingly sensitive sore spot if anyone were to bring up the show and how it simply stopped and never ended.

While it is not new that some shows do not get sufficient notice to wrap-up or conclude their storylines before receiving notice that their show has been cancelled, it is rather new that some shows are willfully choosing to disregard the writing-on-the-wall.  It has become a standard showrunner’s ostrich-tactic to deny the impending death-knell and protest to the bitter-end that there could be a last minute reprieve.

But such willful blindness to the harsh realities of television is not only ludicrous, it is alienating.  It is simply wrong for a showrunner to disregard the cold, hard truth that their show may get pink-slipped at the end of its season or will not receive the coveted “back nine” episode order – or worse yet, could be pulled off the broadcast schedule at any moment.

This lack of foresight ultimately divides the fan-base.  There are die-hard fans who will appreciate the last-stand approach and who will stand by the show even if it fails to plan for its end-date.  They will still buy the DVD’s and encourage others to discover the now defunct show.

However, there are also the fans who will be outraged that the show ended without a proper ending — where characters are left disjointed, stuck in jeopardy and without seeing their favorite couples united.  Nothing is more galvanizing than never seeing if a “will-they-or-won’t-they” type couple actually gets together.  The lack of a payoff and/or resolution drives away the very fans that supported the show and stuck with it once it is gone.  They will not buy the DVD’s and they will tell everyone they know that it was not worth watching because it failed to have an ending.

In the case of such recent shows as LONESTAR and MY GENERATION, they were not even on the broadcast schedule long enough for anyone to fully understand what either show was about, let alone to truly become attached and mourn them when they were suddenly cancelled.  But in the case of several other recent television series, they were around a lot longer and fans became much more attached and invested in the stories and characters.  A few, like CAPRICA and LIFE UNEXPECTED, understand that their end-date is approaching and they make an effort to resolve their bigger storylines and place their characters in settled positions that their fans will appreciate.  Such shows will be remembered fondly for their foresight, sensitivity and appreciation of their fans.

Then there are the shows that play “ostrich” and refuse to acknowledge that the end is coming.  Three good examples are V, THE CAPE and STARGATE UNIVERSE.  Ratings for these series have never been very high and yet ignoring the signs that these shows were in jeopardy, the showrunners deliberately chose to move forward at their leisurely pace as if they had all the time in the world to introduce and resolve their stories.

Having just watched the season finales (and most likely, the series finales) for V and THE CAPE, such stubbornness feels selfish.  Just because the showrunners/writers did not want to acknowledge, let alone plan for an accelerated end-date, they literally left their viewers hanging.  These are the shows that divide fans and won’t be remembered so fondly.  To not see if Vince Faraday was ever reunited with his family; did Peter Fleming succumb to his alter-ego Chess; did Orwell slowly lose her mind like her father – THE CAPE never answered any of these questions.  It only left fans wondering what-might-have-been.  Likewise with V – it left the entire population of the planet enthralled by Anna’s bliss and vulnerable for occupation; it did not explain Hobbes’ sudden departure and abandonment of his new relationship with Erica; it did not reveal if Tyler was actually dead or would be saved by the advanced medical technology of the Visitors; and the fates of both Lisa and Chad Decker were hanging in the balance.

To conclude either of these shows at such unresolved points is painful and disillusioning.  While THE CAPE only aired 9 episodes and had its final episode reserved for internet viewing and thus may not have had enough time to truly write and film a proper ending, it certainly could have added an epilogue or filmed one more scene showing Vince reunited with his family.  However, in V’s case, the crime is more egregious.  Being in its second season and never being a true ratings-hit, the series could have easily planned an alternate-ending episode.  There was sufficient time and notice to plan for the eventuality that the show does not return for another season.

In addition to V and THE CAPE, there are several more television series that are likely to fall beneath the chopping-block this season and which should plan for an end in case they are cancelled.  Currently, STARGATE UNIVERSE is airing its final 10 episodes.  It has already received its cancellation notice and, while it may not be possible to film an alternate ending to wrap up the series, the show does have time to add perhaps an epilogue explaining what happened to the survivors stuck abroad the alien spaceship Destiny.  Also heading smack towards cancellation is THE EVENT and perhaps FRINGE.  Both have borderline ratings and could easily fall under the television guillotine.

It is time for showrunners and writers to examine the legacy of their shows.  Do they want their legacy to be along the lines of:  “fun show, but it never had an ending – cannot recommend it” or “fun show, cut-short before it’s time, but they at least got to wrap it up – recommend checking it out”?  Television is not just entertainment for the present – it provides entertainment for the future.  Several television series have secured their legacy simply by finding a way to provide closure for their fans.  Two key examples were FIREFLY and PUSHING DAISIES.  By hell-or-high-water those shows found a way to provide satisfying endings for their fans and they are remembered not only with fondness – but with fanatical fervor as new fans are recruited each year.  There is something to be said for legacy – if only each show would take such care with their stories and characters, then they too could enter the hallowed halls of welcomed acclaim.

It is time for television to stop following the churn-and-burn philosophy as if it did not matter how a television show is remembered, and adopt an contingency plan.  An exit strategy only demonstrates an appreciation of the established fans.  So it is time to abolish cliff-hangers.  Such cheap tricks are unwanted, unnecessary and are ruining television.