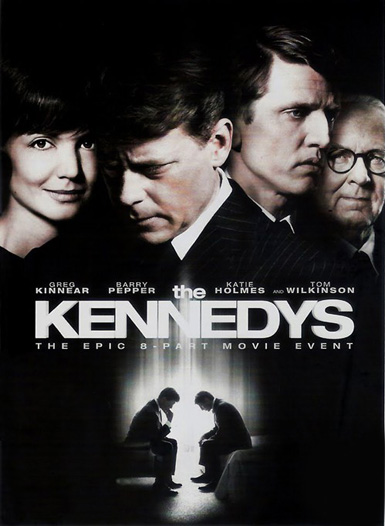 After being deemed to hot for the History Channel, this April will see the hugely controversial KENNEDYS miniseries unspool on ReelzChannel in the States (and History Television in Canada). A decision, which after getting the opportunity to screen the first two episodes of the 8-part miniseries over the weekend, may go down in history (pun, intended) as one helluva bad one.

Now don’t get us wrong, as someone who has spent far more hours in front of a television than a text book, we’re the first to admit that we’re probably not the most qualified person to judge THE KENNEDYS on its historical merits. That said, what we are more than qualified to speak to is the value — both in terms of entertainment and education — that watching the miniseries had on our life.

Was the powerful and ambitious family patriarch Joe Kennedy (phenomenally brought to life by Tom Wilkinson) really that controlling of his sons? Was Greg Kinnear’s John F. Kennedy seriously so brazen about his womanizing ways? Did the producers not bother to audition Katie Holmes before awarding her the role of Jacqueline Kennedy? Admittedly, that last question was more a criticism on the disappointing work by Holmes herself, who we’re sorry to report continues to react as if acting opposite Dawson at the CREEK. But that aside, those were just some of the questions we found ourselves pressing pause to find answers for online.

Suffice to say, after getting an insiders look — regardless of how accurate or inaccurate it may be — at one of the country’s most iconic families during a truly remarkable period in American history, it’s safe to say that we’re yearning for more. And in the end, isn’t that what History Television should be all about? Producing high quality programming that encourages and inspires viewers to take it upon themselves to learn more. We certainly think so.