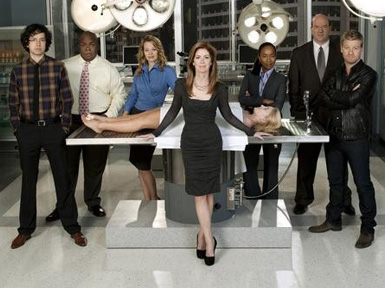 It takes a special type of procedural to entice us to tune into a show that we’d otherwise ignore. Unfortunately for BODY OF PROOF, ABC’s latest entrant into an already overcrowded marketplace, the only thing special about it is the astounding amount of disdain it seems to have for its audience.

From its overtly formulaic write-by-numbers nature, to its insistence on beating you over the head with its premise, BODY OF PROOF just about encapsulates everything that is wrong with the way modern day network television works. Almost to the point where we encourage you to watch tonight’s premiere in order to see just how little ABC respects its audience’s intelligence. But before we get into examining everything that is truly wrong with this show, let’s start with what is right.

Dana Delany is proof positive that unless your name is Meryl Streep, television is where it’s at for woman of a certain age. As Dr. Megan Hunt, a brilliant yet cantankerous Brain Surgeon who is forced to work as a Medical Examiner [ME] following a horrific car crash that leaves her incapable of operating, Delany single-handedly steals the show. Smart, sexy, hard-nosed yet vulnerable, it’s little mystery as to how the small screen staple has managed to carve out a career for herself that has lasted the better part of three decades.

Also solid are Delany’s supporting cast including partner Peter (Obligatory future love interest played by yet another Aussie import Nicholas Bishop), skeptical old school police detective (John Carroll Lynch) and her beautiful bombshell of a boss (the always welcome former numerical hottie Jeri “Seven of Nine” Ryan). Unfortunately where things get ugly are when the character’s start to open their mouths. And therein lies the problem.

It’s one thing to properly communicate the premise of a show (Read: Dr. Hunt, brilliant, hard to work with, pretty much the female equivalent of Dr. House or the Mentalist), it is another thing entirely to repeat said premise over and over and over again. Not only does every single scene feel the need to inexplicably reiterate Dr. Hunt’s current predicament (Again: She misses her previous life as a surgeon, regrets how her workaholic ways damaged her relationship with her 12-year old daughter who is currently residing with her bitter ex-husband who has sole custody and most importantly of all… plays by her on rules!) it does so with the clunkiest of clunky dialogue. So much so that after 44 minutes of enduring one-liners like “She [Megan] seems to care about dead people more than she ever cared about the living,” “I know a lot of ME’s [Medical Examiners] and none of them are a big as a pain in the ass as you are,” and “You might try playing nice once in a while.” we can pretty much guarantee that you’ll be yelling to your TV… WE GET IT!

Suffice to say, TV audiences deserve better, and so to does star Dana Delany. Grade: D