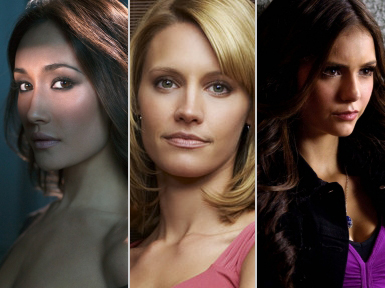 Your recent streak of DEGRASSI scoop has been nothing short of astounding. Care to keep the streak alive? — Mandy
The TV Addict: Despite the fact that we would very much prefer you characterize our recent streak of DEGRASSI scoop as “remarkable” rather than “astounding,” we are more than happy to oblige. If only to put to rest one of the big concerns we’ve been hearing from a handful of DEGRASSI fans since we broke the news about cast additions for the upcoming eleventh season. Rest assured, said additions will in no way take away screen time from the current cast you’ve come to know and love. So much so that upcoming eleventh season episodes will have one student of the male persuasion tackle the taboo that is shoplifting, another who is no stranger to trouble finding herself confronted with cocaine, while a third fan favorite is forced to deal with the baggage that comes when two squabbling parents fail to handle their divorce as maturely as one might hope.

Any PRIVATE PRACTICE scoop? — Jennifer
Not-so-fun-fact: Fans have not seen the last of Charlotte’s harrowing rape storyline, which will return to the forefront in the upcoming PRIVATE PRACTICE season finale when Charlotte is forced to re-live her terrifying ordeal in an effort to help treat another survivor.

With the summer season just around the corner, watch-cha got for us WAREHOUSE 13 fans? — Brian
The TV Addict: While it probably won’t come as much of a surprise to fans that last season’s finale that saw Myka exit from her job at the Warehouse won’t be permanent (well, duh!), what might come as a surprise is what happens next. When WAREHOUSE 13 returns this summer for its highly anticipated third season, Myka will be forced to re-team with a former co-worker at the Denver Secret Service to track down the prime suspect in the death of her partner and lover, Sam Martino. Meanwhile, on a lighter note, freshly minted agent Steve (Aaron Ashmore) will work with Claudia when they experience their own close encounter forcing them to rely on a canine friend as their only eye-witness.

Any NIKITA news? — Jeff
The TV Addict: The upcoming season finale of NIKITA (Note to the CW, we said season, not series finale) will find our titular heroine caught between a rock and a hard place when Percy overplays is hand. Turns out, blackmailing key members of the CIA in an attempt to become acting CIA director may not have been one of his best ideas! Particularly when three of the aforementioned key members of the oversight committee that created Division kidnap Alex and instruct Nikita to kill Percy.

Earlier in the month Michael Ausiello hinted to the fact that something bad will go down between Amber and her Prom date on PARENTHOOD, care to elaborate? — Gill
The TV Addict: Not really. Except to say that what goes down between Amber and her date at prom is just the beginning of a really tough time for Amber that may-or-may-not end up with the entire Braverman clan taking a trip to the Emergency Room.

HELLCATS’ interminable has been well hell, anything to help us fans pass the time? — Shaindy
The TV Addict: Expect major hurdles for those cheerleaders when an infectious disease threatens their eligibility for Nationals. Oh, and did we mention that not helping the situation will be the unexpected arrival of Marti’s long lost not-so-daddy-dearest who has a not so cheery history of alcohol and drug abuse.

Klaus! Klaus! Klaus! When are we finally going to meet the big VAMPIRE DIARIES baddies that we’ve heard so much about? — Bailey
The TV Addict: After almost a season of hype, Klaus will finally arrive on the April 21st episode appropriately titled, “Klaus.” Of course, like everything on THE VAMPIRE DIARIES, there is a slight catch. Said mysterious baddie will first be revealed via flashback when a trip back in time to 1941 reveals Katherine’s introduction to Elijah and Klaus, along with the origin of the moonstone curse.

I can’t handle the uncertainty dammit! Will there or won’t there be a wedding on GREY’S ANATOMY by the end of the season? — Ally
The TV Addict: Well as usual, this is another one of our favourite good news bad news type of situations. Which is to say, there will be a wedding, but it will probably will not be under the circumstances that fans are expecting.

I’m absolutely loving “TV Showrunner Madness”, but find myself disappointed by the number of favourites — including BREAKING BAD’s Vince Gilligan and THE WIRE’s David Simon — that were regretfully left warming the bench. What’s the deal? — Dillon
The TV Addict: The deal is that TV Showrunner Madness — as evidence by the fact that we kicked off the competition during the final week of March — was a very last minute idea that popped into our head. Rest assured, next March, expect the field of 32 to be expanded to include all of your favourites because let’s face it, we know a good idea when we accidentally stumble on one!

Is there a reason you never seem to talk about PSYCH on this website? — Rayna
The TV Addict: There is a very good reason we never talk about PSYCH on this website and it goes a little something like this: We don’t get USA Network on our cable package! That said, we do get inside intel, which is why we hope to make up for our lack of PSYCH scoop with the hilarious title to an upcoming sixth season episode, “Shawn Rescues Darth Vader.”

Any word on how my homeboy Vinnie Chase has been doing since he got arrested in last season’s ENTOURAGE finale? — Mike
The TV Addict: Not too good actually. Vincent Chase has spent his hiatus holed up in Promises Rehab Center in Malibu. But before you start to worry that the eight and final season of ENTOURAGE will play out like an episode of Dr. Drew’s CELEBRITY REHAB, don’t! When ENTOURAGE does return, it will kick off with Vince being released from rehab, where the big question everyone in Hollywood will be asking is whether or not the once young promising star has what it takes to put his life [and career] back on track. Our money’s on yes, how about you?

Well that about wraps it up folks for this edition of “Ask the Addict.” if you’ve got a question for the TV Addict, you can email me directly at info@thetvaddict.com or follow me on twitter @thetvaddict. (Additional reporting by Tiffany Vogt)