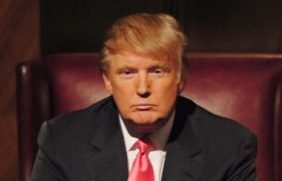 This morning, I did something that — as a TV fan who considers certain reality shows to be among his guiltiest of pleasures — was tough but necessary: I deleted THE CELEBRITY APPRENTICE from my DVR. Despite having thoroughly enjoyed this season, I can no longer in good faith support anything tainted by Donald Trump, and would encourage others to do so as well.

Trump is many things, including a blowhard and an egomaniac. Always has been and, I have to assume, always will be. But above all, he is a man whose desperate attempts to keep himself relevant have led to such memorable media blitzes as his support of homophobic beauty queen Carrie Prejean and his nasty public feud with Rosie O’Donnell. More recently, he has stepped into the spotlight — stealing it from far more important issues — with a laughable presidential bid fueled almost entirely by the badly-coiffed tycoon hitching his star to the birther wagon.

Yesterday, in what was surely a low-point in recent American history, Barack Obama — the sitting president of the United States of America — was forced to hold a press conference at which he handed out copies of his birth certificate in order to silence those who insist that he is not qualified to hold the office.

That should have ended the talk and silenced Trump, who has made this the cornerstone issue of his will-he-or-won’t-he candidacy.

Instead, Trump immediate ran to cameras and began insisting that the president should not provide college transcripts and implying that somehow Obama was not worthy of the presidency.

In many corners, Trump is now being labeled a racist, a term which most agree applies to many in the “birther” movement. (Rather than come right out and admit to being freaked that an African-American is in power, the birthers couch their racism by not-so-subtly implying that there is something “not quite right” about Obama in an attempt to delegitimize his presidency).

I, however, do not believe that to be true of Trump. Instead, the man is a media whore who will attach himself to anything — no matter how disgusting — that keeps him in the spotlight. The moment a birth certificate was produced, he had no choice but to find another way to remain in the spotlight, thus his intimating that the something scandalous might be found in the president’s college records.

As MSNBC’s Lawrence O’Donnell said during last night’s broadcast, “NBC has created a monster who is using his NBC fame to spew hatred, reeking with racist overtones and undertones about the president of the United States.” He added, “In his desperation today, Trump turned from attacking one man’s birth certificate to actually trying to undermine the acceptance of academic credentials of not only Barack Obama, but of African-Americans generally.”

Whether Trump is doing so out of a need to feed his oversized ego by remaining “relevant” or for some darker reason, I do not know. But what I do know is that I can no longer take any pleasure in watching any show featuring or produced by him, nor will I be visiting his casinos or doing anything else that might put money into his pocket.

In the end, Donald Trump believes in one thing and one thing only: His own glorification. He loves touting that CELEBRITY APPRENTICE is “NBC’s top-rated show.” Well, I hope that you’ll join me in helping to make that yet another lie by refusing to tune in to future episodes. After all, given how many other options there are on Sunday night, it’s not like you’ll have trouble finding something — anything — more entertaining.