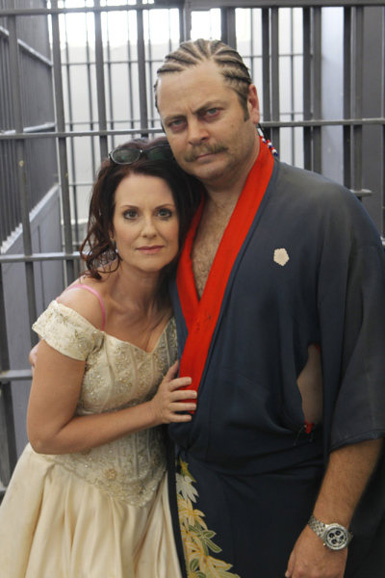 Despite a May Sweeps filled with unexpected plot twists, pregnancies and character deaths, the biggest surprise may have in fact been the one fans didn’t see. Which is to say, good people of Pawnee, she’s coming. Who’s coming? Ron Swanson’s first wife Tammy 1 is coming to PARKS AND RECREATION. Be afraid… be very afraid.

And while much of the discussion has been centered around which talented actress has the gravitas to step into the shoes of a character so terrifying, she, as Nick Offerman so delicately put its, “scares the second Tammy shitless.” the man, the myth, the moustache is actually less concerned with the who and more with the how.

“There’s been a lot of conversation about it and the trickiest part is that my wife Megan [Editor’s Note: Tammy 2 is played by none other than Nick Offerman’s incredibly talented real-life wife Megan Mullally] has established herself as such an incredible Disney bad-guy — the most evil monster in the tri-state area — and so when it comes to casting the main question is what is it going to be about the first Tammy that scares the hell out of the second Tammy?” admitted Offerman during a recent one-on-one with the TV Addict. “For me, I’m looking forward to how the writers and how [PARKS AND RECREATION showrunner] Mike Schur answer that question more than the casting itself.”

Luckily, that didn’t stop Offerman from joining in the speculative fun by offering up his two cents.

“There’s been all kinds of ideas thrown around and Megan is trying to start a Facebook campaign for Oprah to be the first Tammy.” said Offerman. “I actually think it would be amazing because Oprah is such an amazing actor and I’m sure she could play someone who is really scary. Who knows, it could be a fun turn now that she’s got time on her hands.”

Stay tuned to theTVaddict.com all week long for more with Nick Offerman, including his surprising Canadian connection.