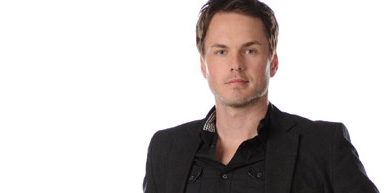 If you’re anything like this TV Addict, odds are fairly certain that you spend an inordinate amount of time scratching your head over some of the shall we say more curious decisions TV Networks make when it comes to some of your favorite shows. But what about the actors involved in the shows themselves? As one might imagine, having starred in BATTLESTAR GALACTICA, the short-lived pilot-turned-internet-phenomenon NOBODY’s WATCHING and NBC’s less-than-successful KNIGHT RIDER reboot, actor Paul Campbell has a unique perspective on such matters. One that he was only too happy to share during a recent one-on-one promoting ALMOST HEROES, a new original comedy series that recently premiered on Showcase in Canada.

As a young actor you made the decision to leave BATTLESTAR GALACTICA fairly early on for a larger role on a potential pilot that didn’t end up getting picked up. Do you ever look back at decisions like that and wonder, what could have been?
Paul Campbell: No. I found that this is the business that you can’t afford to ever look back and say what could have been. Because when you have those sort of decisions to make — decisions where I either stick with a show [BATTLESTAR GALACTICA] where there are no guarantees that this character [Billy] is ever going to be more than a sideline player or try my luck with a pilot I had just booked — there’s no value in looking back. I’m constantly faced with those decisions. Should I take this Canadian series that I’m on, should I got to Romania and shoot a movie, what am I missing, as an actor, there is always going to be that “What If?”

As an observer on the periphery of this business we call show, it’s always interesting to uncover the thought process that goes into those type of seemingly career-altering decisions.
Well I was in Los Angeles testing for PSYCH which is on USA Network and I got a call from Ron Moore saying that we just got wind that you’re testing for this show. This was very early on in Season 2 and that point I wasn’t on contract with BATTLESTAR GALACTICA, I was a per episode basis where there were no guarantees, so I would constantly find myself flipping through the script to see if my name was on the cast list to see if I had been killed. So I thought, “Why not?” I have an opportunity to test for this big USA show and he called me while I was at the Universal lot right after my test for PSYCH and he said look, you’re going to either have to commit where we lock you down for 5 years or we’ll probably have to start thinking about writing you out. And I decided that ultimately it was best if we went our separate ways and they were really great about writing another 10 episodes for me before Billy finally bit the bullet so to speak.

But on the plus side, Billy’s death is one of those cool ones that really stuck with fans. After-all, if you want to die in a series that is destined for greatness, you want to do it early on and in a big way like Ian Somerhalder on LOST, rather than in the fourth or fifth season when nobody really cares anymore! But we digress. Your next experience was on a pilot called NOBODY’s WATCHING produced by Bill Lawrence that after not getting picked up turned into somewhat of an internet sensation. What was that experience like and what was it like working with Bill Lawrence?
Yeah NOBODY’S WATCHING was actually the project that first took me away from BATTLESTA GALACTICA. That was the pilot that I booked after the miniseries. It was phenomenal working with Bill and actually, Bill co-wrote that script with Neil Goldman and Garrett Donovan who are showrunners on COMMUNITY, which is phenomenal. For me it was the first time doing comedy and because it was a hybrid of single camera stuff — which I actually preferred — and a live action studio audience it was the best of both worlds. When the show failed to get picked up, Bill Lawrence very savvily leaked the pilot onto YouTube. I remember being back in Vancouver having taken he news very badly after almost being guaranteed that we were which is the dream and all of sudden I got a call from my manager saying that you guys are on CNN and they’re doing a feature on NOBODY’S WATCHING. Within a week it just went from zero to millions of hits, we where doing talk shows, on CARSON DAILY, and because Warner Bros. had sold it at the time, NBC who originally passed said we’ll order 6 scripts but contingent on your ability to build an online following. If you guys build a big online fan base we’ll have a big built in audience when we go to air. So we spent 4 to 6 months — Bill, Neal, Garrett and Taran [Killam] who is now on SATURDAY NIGHT LIVE — shooting viral videos. We had such an incredible outpouring of support that it looked like NBC was going to pick us up, until the last minute. When they changed their mind and said we’re going to give you an hour of Primetime for a special. There was a big announcement at TCA [The Television Critics Association Press Tour], and the next day they phoned and said we have no intention of ever doing the show. That was my first Hollywood wake up call.

And not the first time NBC would completely screw you!
NBC has such a wonderful history of shooting themselves in the foot. I don’t know what’s going on over there but they have a really hard time of getting things right. Which is not to say they don’t have some really great shows, some of their comedy — COMMUNITY, 30 ROCK of course — but man they just can’t seem to make it work.

And speaking of not making it work, your next project was on KNIGHT RIDER, a reboot which on paper seemed like a sure bet. At what point as an actor did you realize that this wasn’t going to work?
Almost immediately. And this happens with a number of projects that I’ve done — there are so many friggin’ cooks in the kitchen on both the production and executive level — where everybody has got to get their two cents in yet nobody really is willing to take a risk. Everybody wants to play it so safe and with KNIGHT RIDER, they tried so hard to appeal to everybody, they appealed to nobody. Patrick Massett and John Zinman, who had written a lot of stuff for FRIDAY NIGHT LIGHTS which was one of the best shows on TV (again, NBC dip-shits!) those guys wrote a couple of episodes for KNIGHT RIDER. I read their first draft before they had submitted to Network and it was fantastic, I mean we would read it and get so excited about it. Really, dark, really edgy stuff that would finally allow us to make episodes that would force audiences to sit up, take notice and take us seriously. But when they come back with the shooting draft, following notes and revisions from NBC, it was a piece of shit. Everything good about the script, they dumbed it down, brightened it up, saying we wanted to have dads watch with their sons and then they would throw in a bunch of woman in bikinis. What Dad is going to have their son watch a bunch of woman strut around in bikinis? I mean are you appealing to the kids, or are you appealing to the 18-49? That was the problem! There was one episode when the Kit Cave had been raided, it was all blown up and the set decorator came in and they put colored streamers everywhere, bright pastels saying the show was too dark, we want to “happy” the place up a bit. At that point the cast all looked at each other and went, that’s it, we’re cancelled. Like who is making these decisions? It’s so frustrating to see something that has a lot of potential just go through that filter and come out a big streaming turd.

At least you’ve been able to keep your sense of humor through all of this.
I’ve been in the business for 8 going on 9 years — and by the way, for the record, I hate it when people say 8 going on 9 as if you don’t know what the next number in the sequence is! But I’ve gotten to the point where I’m really starting to enjoy being relaxed about everything and much happier taking control of my own choices. Saying, you know what, maybe that’s not the greatest script or maybe that has the potential to not be the greatest project, but it sounds like a lot of fun, let’s do it.

Is that the type of thinking that brought you to Canada?
Actually, that was Visa issues! Immigration seemed to get really really strict in California really fast.

So what was it specifically that attracted you to ALMOST HEROES?
It couldn’t be more of a comedy if it tried. It’s one of the most fun things — I say that NOBODY’s WATCHING was probably the most fun I ever had in part because it was the first comedy I ever did — but this is the second most, if not equally the most fun I ever had. Ryan and Jason Belleville who created the show, I’ve known for years. I actually met through Taran Killam. They pitched the show a couple of years ago to CBS who really liked but didn’t have room on their schedule, so they ended up selling it to Showcase. ALMOST HEROES is a single camera half hour comedy about these two brothers. One of whom went off to Harvard, the smart savvy cool brother, while the other stayed home to goof off and live behind their Father’s comic book shop. When the father passes away, the Harvard brother comes back to the funeral and ends up sticking around to help his brother run this failing comic book shop in this shitty strip mall set in Toronto.