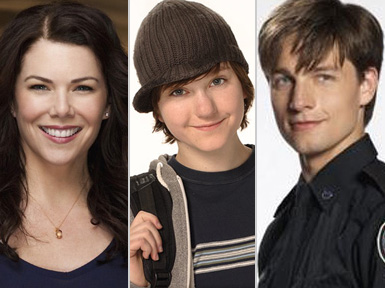 Dear TV Addict, I know you’re on vacation, but as someone who has really been enjoying your increasingly informative ‘Ask the Addict’ columns as of late I was wondering if there was any chance you could post an abbreviated one this week? — Jeff
The TV Addict: Ask and ye shall receive! Thanks in no small part to our somewhat insatiable addiction to TV, coupled with the unexpected access to high speed internet available at the current undisclosed location we find ourselves staying in, we’re only too happy to oblige with a vacation shortened edition of ‘Ask the Addict’ in 3… 2… 1…

With the new season of DEGRASSI now less than two weeks away, I’m hoping you can provide some intel on what to expect. Have I mentioned I cannot wait for July 18th? — Hillary
The TV Addict: Think you’re excited for DEGRASSI’s July 18th premiere (9PM on TeenNick and MuchMusic in Canada), well, join the club. In fact, we’re so enthusiastic for the eleventh season of Canada’s most popular export that we decided to cajole our source on the set to share some scoop… and share he (or “she” did!). Not only will the one-hour season premiere feature a VERY (Editor’s Note: Our source actually took it upon themselves to type “very” in all caps) unexpected death, the aftermath will be felt throughout the season. What’s more, continuing the show’s penchant to go where no teen-oriented show has gone before, our source promises that Adam (Jordan Todosey) is going to explore the physical sides of being an FTM transgender teen.

Loving Season Two of ROOKIE BLUE! Any intel? — Michelle
The TV Addict: We don’t so much have intel, as a belated birthday gift for star Gregory Smith in the form of some really great news. Turns out, despite the fact that both ABC and Global TV in Canada have yet to officially announce a third season pickup, your very own TV Addict has learned that casting has already begun for third season!

I’ve been hearing a lot of talk about zombies on the new season of TORCHWOOD. Is MIRACLE DAY really borrowing a page from THE WALKING DEAD’s playbook? — Tina
The TV Addict: You’ve heard correctly. TORCHWOOD: MIRACLE DAY has in fact entered the zombie-zone! Or at least that’s what we’re calling a planet full of people who can’t die. Suffice it to say, it’s not pretty.

Are Amy and Paul going to get their own storyline this season on THE NINE LIVES OF CHLOE KING? — Lesley
The TV Addict: All is not smooth sailing for Chloe’s BBF’s and in the July 12 episode Paul tries to get creative in his attempt to patch things up with his lady-love only to have it backfire spectacularly which may leave the door open for a rival who catch’s Amy’s eye.

Getting even more excited for TERRA NOVA, any scoop to tied me over until this show finally premieres? — Bill
The TV Addict: Scoop, we’ve got tons. Unfortunately since we have this little thing about staying on Fox’s good side, we’ll simply say that Jim Shannon’s (Jason O’Mara) brood isn’t the only dysfunctional family fans are going to have to worry about come TERRA NOVA’s much-anticipated September premiere.

What’s next for Zane and Jo in the upcoming season of EUREKA? — Rayna
The TV Addict: Zane is not a clueless as he may have previously appeared in this new timeline. The mystery of how or why Jo had his grandmother’s ring drives him a bit crazy and he takes drastic measures to learn the truth.

Love, love, love me some PARENTHOOD. Any word on what’s in store come Season 3? — Brenda
The TV Addict: Since TVLine’s Vlada Gelman beat us to the punch with regards to yesterday’s big PARENTHOOD scoop (Pause as we clench fist, stare up into space and scream “TVLiiiiiiinnnnnneeeee!”), we’ll simply touch on the single biggest bit of info that TVLine completely ignored! Jason Ritter’s Mr. Cyr, who fans may remember as Sarah’s (Lauren Graham) on again off again love interest will be back. R.I.P. THE EVENT.