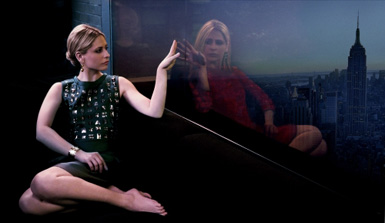 You’ve seen the commercials. You’ve heard the hype. Now there’s only one thing you want to know: Which of the new fall shows are worth watching and which should be avoided at all costs? In this continuing series, we give you the scoop on some of the most highly-anticipated shows of the season, with today’s subject being Sarah Michelle Gellar’s much-anticipated return to the small screen in RINGER.

The Plot: Sarah Michelle Gellar stars as a woman who, after witnessing a murder, goes on the run, hiding out by assuming the life of her wealthy identical twin sister – only to learn that her sister’s seemingly idyllic life is just as complicated and dangerous as the one she’s trying to leave behind. Bridget is six months sober and starting to turn her life around when she is the sole witness to a professional hit. Despite the assurances of her FBI protector, Agent Victor Machado, Bridget knows her life is on the line. She flees to New York, telling no one, not even her Narcotics Anonymous sponsor, Malcolm. In New York, Bridget reunites with her estranged twin, Siobhan. Wealthy, pampered and married to the strikingly handsome Andrew Martin, Siobhan lives what appears to be a fairy tale life – a life where no one knows that Bridget exists. The sisters seem to be mending their frayed relationship, until Siobhan disappears overboard during a boat trip, and Bridget makes the split decision to take on her sister’s identity. She discovers shocking secrets, not only about her sister and her marriage, but also about Siobhan’s best friend, Gemma, and Gemma’s husband, Henry. And when someone tries to kill Bridget in her sister’s penthouse, she realizes she is no safer as Siobhan than she is as herself.

The First Impression: Is cautiously optimistic. On the one hand, despite a slew of storylines that fit perfectly within the confines of the network that gave us GOSSIP GIRL, ONE TREE HILL and THE VAMPIRE DIARIES (Read: love triangles, betrayals and murders oh my!), RINGER is unequivocally unlike anything the CW has ever aired. Suffice it to say, dark and twisty doesn’t even begin to describe the almost Hitchcockian manner in which the pilot unravels as it begins to peel back the surprising and plentiful layers of twin sisters Bridget and Siobhan convincingly played by Sarah Michelle Gellar. Adding to the intrigue are supporting roles for LOST alum Nestor Carbonell as an FBI agent on the hunt for Bridget, unsuspecting best friend Gemma played by Tara Summers and obligatory eye-candy courtesy of Ioan Gruffudd, THE GOOD WIFE’s Mike Colter and LIFE UNEXPECTED’s Kristoffer Polaha.

The Concern: Did we mention RINGER is unequivocally unlike anything the CW has ever aired? Because honestly, it bares repeating. In fact, with the exception of one teenage character (Bridget’s not-so-welcome step daughter from hell), the show, which was originally developed for CBS, has an incredibly grown-up vibe to it. One that demands audiences pay close attention or risk losing track of who-did-what-to-whom-where! Which bring us to…

The Verdict: Having already re-watched the pilot on three different occasions to ensure we caught every piercing character gaze and ominous reaction, paying close attention to this daring attempt by the CW to redefine itself as a network shouldn’t be a problem.

RINGER premieres on Tuesday September 13th at 9PM on the CW (GlobalTV in Canada).