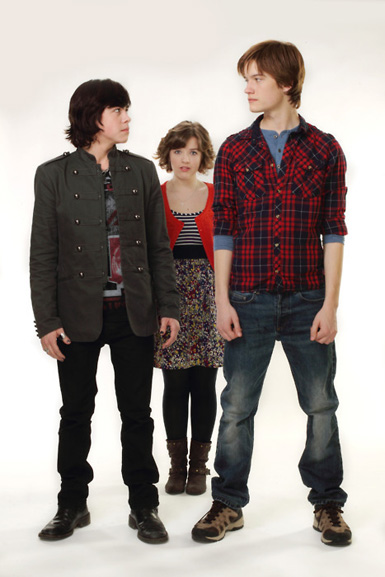 Did you know that your enjoyment of the new season of DEGRASSI may in fact boil down to your taste in desserts? You did if you’re a fan of Canada’s most popular export, which thanks to last night’s introduction of Jake Martin (Justin Kelly), finally got their first taste of “Cake” (That’s Clare and Jake for those of you who don’t know their tumblr from their twitter!) So just how does actor Justin Kelly feel about playing the new guy in Clare’s life, also konwn as the young man who may-or-may-not have set Twitter ablaze with declarations of [pastry] war following a simple kiss during last night’s episode? We recently had the opportunity to catch up with the affable actor to find out just that. See for yourself after the jump.

What’s it like being the new guy on the set of such an established show like DEGRASSI?
Justin Kelly: There was definitely a level of intimidation getting into it. But I’ve auditioned for a couple of characters prior to “Jake,” so I knew what the general process was like going into the room and reading for the Producers. Plus, my buddy and my best friend Munro [Chambers[ has been on the show since season 10 so that actually took a lot of the stress out of everything in terms of meeting the cast and being a part of the project.

Somewhat ironic that your best friend off-screen may turn out to be your worst enemy on!
Yeah… we start off a little on edge with each other because I see him [Eli] as the ex-boyfriend to my girlfriend. Any guy who has that towards someone else, it’s not necessarily a positive thing. There’s a whole that goes down during the [Redacted to avoid Spoilers!] and what Eli tries to do to break up Jake and Clare, he doesn’t like. It’s kind of the first time that he really gets into the drama of the series, before he was just kind of laid back about it all.

What brings Jake to Degrassi?
As far as I know, he had a past with Clare, they were childhood acquaintances, he threw dead frogs at her! He moves up North with his father, they end up relocating back to the city and his father starts to build a relationship with Clare’s mother who was recently divorced and at the same time Jake and Clare build their own relationship.

Is there any uncomfortableness about exploring a relationship for Jake and Clare while there parents do the exact same thing?
We definitely have a secret to hide from our parents. It comes to a point where at school we can be free, together and everybody knows, it’s fine it’s great. But as soon as we walk into the Edwards household it suddenly becomes where I can’t put my arm around her without worrying if Ms. Edwards is going to come downstairs, or what’s going to happen if my father Glen notices because we obviously still want them to be happy so we have to decided what’s best for everyone.

Are you at all nervous about how the fandom will react to your character coming in between “eClare” and what do you think of “Cake?”
I love it. I think it’s great. Especially with the whole dynamic with “eClare,” I think the battle of the desserts is really something. I think that “eClare,” Eli and Clare together have built such an iconic TV relationship over the last season and to step into that, to be that other guy that breaks up “eClare,” I don’t believe that “eClare” fans are going to like them [Jake and Clare] off the top if they’re keen on Eli. But at the same time Jake and Clare start to build their own bond throughout the season and we really see a change from where they meet back in the third episode to where they are now.

Will Jake have any storylines with characters aside from Clare?
It’s mostly Clare, but there is interaction with Eli through Clare being a mutual friend between us, we start to build our own weird relationship. And the stuff we’re shooting now, Jake starts to become buddies with Drew. I had a couple scenes with Luke [Drew] recently where we were shooting, it takes place in a [Redacted to avoid Spoilers!], so Drew and Jake become buddies over that time and I think that’s kind of in the works.

And finally, having interrupted an impromptu jam session for this interview, we have to ask about your apparent musical talent. Seeing as though Degrassi students have had quite a history of forming bands, should fans expect to see your guitar skills on display this season?
Not that I know of. It’s more of a hobby. I’m totally content with not having to showcase my music. I love playing but they’re two separate art forms for me.

You can catch new episodes of DEGRASSI Monday thru Thursday at 9PM on TeenNick (MuchMusic in Canada) or catch up on past episodes for free at clicktowatch.tv