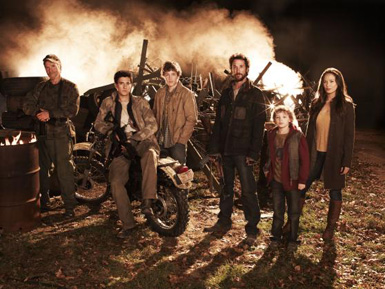 With the explosive 2-hour finale looming, this is a good time to reflect back on FALLING SKIES’ spectacular first season.  From the reveal of a third creepy alien species that may be running everything, to the fact that the Skitters may have once been humans just like us, the first season of FALLING SKIES has been a fantastic ride.

Initially, the series began merely as a story about a small group of survivors who were in the midst of retreating and regrouping — while they tried to find the supplies and weaponry they needed to escape complete annihilation.  But it quickly turned into a tale of how these few men and woman decided to return and enact their revenge on the aliens relentlessly pursuing them.

While the mantra:  ‘retreat, regroup, return, revenge’ sounded good in theory, when it was first spoken, it seemed that Tom Mason’s words were an illusory strategy – a hopeless goal in the face of superior fire power of the occupying aliens.  Yet over the course of the season, we saw that it was not superior weapons that mattered, but rather the question of: what were the weaknesses of their opponents?   The brains-over-brawn strategy seemed ideal given how invincible the aliens felt towards the inferior humans.

It was only after Tom captured one of the Skitters, allowing the survivors to study it, that they finally found a way that Skitters could be killed – but only if you got close enough to shove a knife up into its soft palate.  They also figured out that the Skitters were communicating via high frequency radio waves.  But, by far, the most revealing and starting discovery was when Dr. Anne Glass figured out that Skitters may have once been harnessed creatures themselves – either human or something else.  Skitters were not born Skitters, they were made that way.  It is a hair-raising sensation to think of the Skitters as once human.  Were they all converted humans?  Was that their terrible secret of the harnesses?  They were not merely to control and brain-wash the abducted children; they were used to actually transform children into monsters.  And if that is true, how can we fight them knowing that they were once someone’s child?  And is the process completely irreversible?  And if the Skitters were not the actual enemy, who was?

In the penultimate episode ‘What Hides Beneath,’ it was also discovered that the Skitters were not the true enemy.  It was the previously unknown and unseen tall, skinny and super creepy aliens that seemed to be running everything from behind the scenes.  The Skitters were just the worker-bees sent out to the front lines and to take all the risks with the aid of the mechanical Mechs, which seemed to be nothing more than a bucket of bolts hardwired into a computer brain.  So who exactly are these new beings and why do they hide?  Are they as bullet-proof as the Skitters and Mechs?  What is their weakness and what is their ultimate goal?  And why keep collecting human children to convert into Skitters if the entire planet were truly occupied and under alien control?

With the humans cut-off from each other and unable to effectively communicate without working electronics (thanks to the EMP blast the invaders first used to wipe-out Earth’s global communications), how was the 2nd Mass and the other rag-tag survivors to truly know what is going on around the planet?  Was there a war being waged thousands of miles away or around the globe and that was why the tall aliens held back and continued to hide their identity?

Whether there was a war still being waged, the 2nd Mass proved to be quite the thorn in the aliens’ side.  Unwilling to abandon their children, the survivors came back time-and-time again to rescue their children.  The one prized possession were the children and neither side was going to give them up without a fight.  The Skitters wanted the children for companionship and to make more of their own kind.  But the survivors would never willingly give up on saving the future of mankind – our children.  More valuable than gold or any other resource in the universe, children became an unwitting bargaining chip or currency for the new world order.  Greedy, fearful and self-centered survivors may have traded the children for goods and a few more days of their pathetic lives; but the rest of the survivors knew only one thing:  you leave no man behind — and never, ever our children.

It was surreal to watch a small group of civilians rally to protect themselves when there was literally no one left to protect them.  It was families protecting families.  It is the end of the world, and that is all that is left: our loved ones.  But that is all we need.  So long as we care for each other and watch over each other, humanity stands a chance.  Perhaps those tall aliens do not understand such a basic need of survival – unconditional love.  For those who are still human at heart, it is the most tenacious and valuable emotion of all.  It inspires humans to do the impossible and to fight against insurmountable odds.  But if we are to survive, we must use that undying love as motivation to fight to the end.

Fortunately, one last discovery tipped the scales on our side:  the nefarious, yet resourceful John Pope found a way to penetrate the impervious outer shell of the Mech’s armor.   It was out of the mouths of babes when young Matt Mason wistfully said he’d like to have some Mech bullets to shoot at them for a change.  It was simple really.  Just melt down the Mech’s body armor and create Mech bullets and viola! Mech bullets that will tear apart any Mech.  Another pivotal weakness had been discovered.

But now that a few key weaknesses had been revealed, the next critical element will be gleaning intel on what that aliens are really up to.  It is not enough to attack guns-a-blazing.  The 2nd Mass survivors need to know who they are really fighting and why.  Are the Skitters their true enemy or are they a potential ally? And can those rescued harness kids really pose a threat from within?  Are they collecting intel on the survivors and sharing it telepathically with the Skitters?  Or are they a possible bridge in reaching out to the Skitters and gaining an unexpected ally in this war for our planet?  It is not enough to be armed and ready to fight back.

But with the 2-hour finale on the countdown clock, there is no going back and we can only sit back and see how the first season showdown plays out.  With the knowledge that it will be a cliffhanger, be ready to scream ‘Nooooooo!’ the minute it ends.  Undoubtedly, it will be at the one point where we are dying to know what comes next.  The good news is that we’ll find out – but not until next summer.

So buckle up, FALLING SKIES surely has a few more surprises and perhaps a dirty secret or two in store.