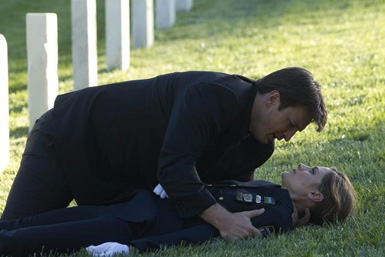 When we last left CASTLE, Nathan Fillion’s titular character had just revealed to Beckett that he loves her. Unfortunately for fans who may-or-may-not have been waiting the better part of three seasons for that little exchange, Beckett — who had just found herself on the wrong end of a sniper’s rifle — may not have heard him. Or did she?

“I think she heard,” teased a very coy CASTLE executive producer Laurie Zaks at ABC’s recent TCA cocktail party in Los Angeles. “There will be a lot of questions in the premiere episode that will dictate and illuminate as to how Beckett will be dealing with what she went through and how their relationship will evolve.”

And while it probably won’t come as much of a surprise to any veteran TV Addict that the start of the hit ABC series’ much-anticipated fourth season will spend an inordinate amount of time dealing with both the physical and emotional aftermath of May’s shocking season finale shooting, what just might come as a surprise is that the finale that fans have spent a good portion of the summer reeling over almost didn’t happen.

“There was a big discussion when we got the script for the final episode about whether Nathan should say ‘I love you’ or not,” admitted Zaks. “But once everybody saw him do it, it was like ‘Oh my God he has to say it… he has to do it!’ Then it was like ‘Now what do we do’?”

Suffice it to say, when a massive part of your show’s appeal is the tricky balancing act that involves keeping your leading players close — but not too close — to getting together, ‘Now what do we do?’ is a question that comes up often. Explained Zaks, “It’s a big challenge for the writers and I think that everybody is very aware of it going on with the will-they-or-won’t-they and that’s part of the fun.”

Which naturally raises the slightly awkward albeit painfully obvious question as to just what Zaks — a twenty year industry veteran who has played an integral role in guiding the series from day one — is hoping happens as we head closer and closer to CASTLE’s September 19th season premiere: Should this be there year that Castle and Beckett go… well, you know?

“I would bet no, I hope not… we’re going to wait until BONES does it and see how that works out!” said Zaks, who responsed after we politely informed her that after Booth and Brennan did just that during the tail end of last season. “Oh damn, I’m going to call [BONES Executive Producer] Stephen Nathan.”

New episodes of CASTLE return to ABC on Monday September 19th at 10PM. Catch up with past episodes you may have missed for free online at clicktowatch.tv