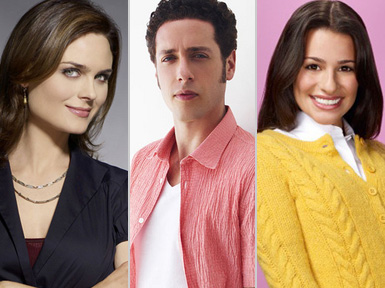 In last week’s edition of Ask the Addict you teased that BONES would kick off the season with a first scene that promises to amaze people… Care to elaborate? — Jennifer
The TV Addict: Seeing as though we have absolutely no idea as to what Hart Hanson was referring to when he revealed that “the first scene shot is going to amaze people,” we actually wouldn’t care to elaborate. But, what we would be more than happy to do is let you in a little secret with regards to what said aforementioned opening scene won’t involve: House hunting! After-all, that little doozy of a discussion won’t go down until the fifth episode of the BONES’ season that will see Booth and Brennan, well actually more so the multi-million dollar-best selling author Brennan, house shopping online.

Any chance you can do this Gleek a solid by sharing some GLEE scoop? Particularly of the Rachel Berry/Lea Michele variety? — Dianna
The TV Addict: According to Lea Michele, who we were lucky enough to catch up with during FOX party at the recent Television Critics Association Press Tour in Los Angels, Rachel Berry fans are in for quite the treat this season. Teased Michele, “I know that I have some really great storylines with Chris Colfer and Darren Criss, I know that I’m going to be in the school musical — which I can’t reveal — but it’s one of my dream roles — not Fanny Brice — and I know that they’re going back to a lot of classic songs. From the first script it was not a lot of top 10 hits but older songs which I love and am so excited to sing and lots of Broadway so I’m super excited about that.”

Although I applaud your recent commitment to a weekly spoiler column, Ask the Addict has been missing one crucial thing over the course of the past few weeks: SUPERNATURAL scoop. So how ’bout it? — Julie
The TV Addict: Suffice it to say, there’s a very good reason why Ask the Addict has been somewhat devoid of SUPERNATURAL scoop. That reason, the fine folks at Warner Bros. Television tend to keep an extra tight lid on story lines emanating from that SUPERNATURAL writer’s room. Luckily for you, we did a little extra snooping this week in an effort to dig up some scoop that goes a little something like so: White it probably won’t come as much as a surprise that those clever SUPERNATURAL writers continue to tap into the cultural zeitgeist du jour, what just might is the subject of their jabs. Which is to say, early episodes of SUPERNATURAL’s seventh season will not only poke fun at Newsweek’s recent controversial cover gal, but the fifth episode of the season will be entitled “Shut Up, Dr. Phil.”

Jonsing for a hit of WEEDS scoop. — Sammy
The TV Addict: The Botwin brood’s penchant for failing to catch a break will continue when one of the younger Botwins ends up in handcuffs. Oh, and just for clarification sake we should probably mention, not the fun role-playing kind of handcuffs. What?! Too much information?

In a recent episode of ROYAL PAINS, Evan finally stood up to Hank and while I loved the moment and thought it was long-overdue, I can’t help but wonder if my favorite cable family is headed for trouble. So are they? — Amy
The TV Addict: According to Evan’s real-life counterpart Paulo Constanzo, who returned to his hometown last week to promote the return of ROYAL PAINS to Canada’s Showcase Network on August 31 (Wednesdays, 10PM), they are indeed headed for trouble. “It was a long time coming and I think that scene really was the beginning of him [Evan] finally standing up for the business he created,” said Costanzo from his suite in the beautiful Hazelton Hotel in downtown Toronto. “And there’s more of that by the way. Before the end of the season there’s big fireworks between the brothers, things go bad.”

Got any idea how the Cul-de-Sac Crew plan on celebrating their return to ABC? — Martin
The TV Addict: We do, but you’re probably not going to want to hear it. According to sources, an early episode of COUGAR TOWN’s third season back will see Jules rushing to the hospital upon learning that a family member has ended up in the ER with a serious hairline skull fracture. Now we know what you’re thinking… Penny Can game gone terribly, terribly, wrong… well, stay tuned.

Massive Mikita Shipper here! Got any word on how Michael and Nikita are handling life on the lam? — Rebecca
The TV Addict: Since we here at theTVaddict.com strive to not just to meet, but exceed your expectations when it comes to answering your questions we’re going to go ahead and not just offer up one word on how Michael and Nikita are doing, but two! It’s complicated. Made all the more so when a beautiful political operative from Michael’s past return to seek protection in an early episode of NIKITA’s second season for not just herself, but her young son as well. Where the complicated part comes in is that the adorable moppet may-or-may-not bare a somewhat striking resemblance to everybody’s favorite former division agent. Awkward.

So excited for PARENTHOOD’s return. Any clues as to how Kristina will handle being pregnant? — Michelle
The TV Addict: Clue #1: AHHHHHHHHHHHHHHHHHHH! Or to be more specific, that is the sound Kristina will very soon be making upon the realization that she will be forced to give birth without her husband Adam by her side. Clue #2: AWWWWWWWWWWWWW! Also konwn as your soon to be reaction upon discovering the identity of just which Braverman is brave enough (pun intended) to step up to the plate to help Kristina deliver a beautiful baby girl.