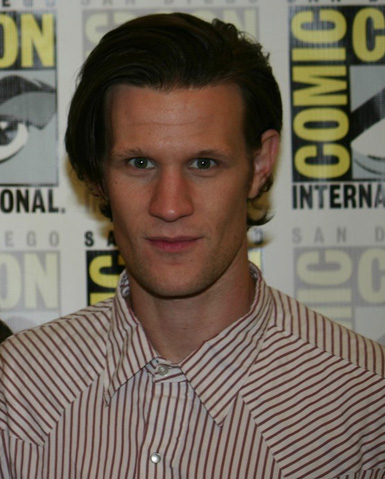 In anticipation of the much-anticipated return of DOCTOR WHO, theTVaddict.com’s West Coast Correspondent Tiffany Vogt recently had the chance to sit down (alongside a gaggle of reporters) with star Matt Smith, who was only too happy to tease what’s in store for fans as the show kicks off the second half of its sixth season this Saturday.

How was it dying and then coming back on a television show, like in “The Impossible Astronaut”?
MATT:  Only in DOCTOR WHO can you make that possible!  I just love the way that Steven [Moffat] plays with time and structure in WHO — and in the next half of the series we really get into the crux of what that is all about and it’s pretty interesting.

How would you describe The Doctor?
MATT:  I think I’m very fortunate to have Steven Moffat as a writer.  He’s very inventive. That’s quite a tricky question because I try not to consider it too much.  I just try to do it.  Maybe in a few years I’ll have more of a perspective on it.  But I think The Doctor should be funny and brilliant and ridiculous — all of those things are in there somewhere.

He seems like such a bundle of energy.  Is that part of the character or something you bring to the role?
MATT:  I think it is just what the actors have gone for.  What’s great is, when I first came, people said, ‘He’s too young.’ But tell me someone who isn’t too young to play a 900 year old time lord?!  You know what I mean?  We’re talking about 20 years difference, but The Doctor’s 900 years old.  No one is that old!  And I think it’s interesting to have someone young play someone old, physically — and that depiction is actually really interesting.

Underneath all those layers of The Doctor, what is the core motivation that he grabs onto?
MATT:  I think humanity.  I think that’s the one thing he cannot ever be is human and he loves them.  He finds it cute that they get married and have Sunday dinner and celebrate Christmas together and all that sort of things.

That sounds a bit more like envy.
MATT:  Yeah.  Kind of.

So The Doctor wants to be human?
MATT.  Yeah, yeah.  I mean yes and no.  But he admires the human nature.  But he’s also a maverick.  He’s a time-traveler — and he’s an addict.  I mean it’s so hard to define him as one thing.  I think you do so at your peril.

You think he’s an addict?
MATT:  Yeah, his addiction is time-traveling.  He’s saving the world!

So he’s more like an adrenaline-junkie?
MATT:  Yeah.  Absolutely!  That’s the great thing.  You can look at him in many, many different ways, and we all have our own opinion on The Doctor and that’s all sort of wonderful.  But he’s never one thing — ever.

In the mid-season finale, we saw as River showed The Doctor that he is seen as a warrior and that people are afraid of him.  Thus, will we see him change as a result of that revelation?
MATT:  Absolutely!  There is a real journey for The Doctor to go on — there’s the journey with River and there’s the one about himself — you know, he dies.  So we’ve got to figure that one out.  I hope there’s been a progression from where we started this year and that there’s a progression from this year to next year going into the 50th Anniversary.  That’s sort of one of the wonders of the part that it’s constantly evolving.

For the 50th Anniversary, John Barrowman said that he would love to be there. Would you like to have him appear for that?
MATT:  Yeah, hey, well the door’s always open.

Absolutely!  They are incredibly excited.  They were like, ‘Can we come too?!’
MATT: Excellent!

Have you enjoyed all the new villains on the show?
MATT:  That’s the great thing about DOCTOR WHO – that is if you look at every villain that comes back, they’re always slightly evolving.  They are always improved a little bit.  And that’s what’s great about WHO monsters, I think — you’ve got to bring them back with something extra.  So they are always getting better and The Doctor has to get better at the same time.

What’s been your favorite monster from DOCTOR WHO?
MATT:  The weeping angels, I think.  They are my favorite.  I love them.  Such a clever monster.  Such a great idea.  ‘Blink’ — what an episode!  It’s just the classic WHO episode.  It’s maybe one of my favorites of all time.

I heard you didn’t watch any DOCTOR WHO before auditioning.  Thus, I was curious when you did start watching?
MATT:  Well, the thing is with me — Karen, she watched more than me — but it wasn’t on TV when I was a kid, which is a shame.  So I read the script; I got the part; I watched the episodes — not all the episodes.  But I watched a hell of a lot of The Doctors.  I started with Tennant then worked backwards.

Of the classic Doctors, do you have a favorite?
MATT:  Troughton is my favorite.  “The Tomb of the Cybermen” is one of my favorites.  The Cybermen are so creepy in it.  What’s wonderful about Troughton is that he is weird and peculiar.  It’s a wonderful performance.  I think the Cybermen were the scariest they’ve ever been in that.

Maybe you could talk about what we should be excited about watching this next part of the season.
MATT:  Well, we start with “Let’s Kill Hitler” and the title does not let the episode down.  It’s a barn-stormer and Alex Kingston is just remarkably brilliant in it.  Then we’ve got these weird creepy dolls coming up in a doll’s house episode.  And Karen gives the performance of the lifetime in Episode 10 — I can’t actually tell you much about it — but it’s so clever and so tricky and so weird.  Toby’s episode “God Complex” feels like cupid does DOCTOR WHO.  It’s so odd.  And there’s a big soundtrack.  Very scary. Craig Owens is back.  James Corden is back in Episode 12 and that’s a good adventure.  I think we’ve got a good double-act near the end.  I like to think so.  Steven [Moffat] doing his brilliant finale writing, but that’s it.  I think it’s a strong half of the season and we’re really pleased that it seems to be gathering up pace in America.

What do you think about getting multiple Doctors back for the anniversary?
MATT:  I think it’s a good idea.  But getting it to happen? That’s tricky.  But how amazing would it be to see Tom Baker?!  Can you imagine just seeing him back in the scarf? That would be amazing! It would be so cool.  He’s a great actor and a good guy.  What an episode!  There could be 5 or 6 Doctors — and all in a room just going ‘Who?’

How was it working with Neil Gaiman for “The Doctor’s Wife”?
MATT:  It was a wonderful episode.  He’s like sanctified royalty, so again, it was one of the greatest experiences that you only really get on DOCTOR WHO. I’m sure we’d love to have Neil back.

Is there any direction you’d like to see The Doctor go in?
MATT:  Well, you know, I kind of leave that to Steven [Moffat] ’cause he’s better at that.  He does that and then I try to come in and articulate that with my version.  So I leave that unto him and then I have the anticipation like the fans do to see what happens.

In the episode “A Good Man Goes To War,” and The Doctor figures out who River Song is and goes dancing around, which was very funny, how many takes did that actually take to do?
MATT:  We actually didn’t have much time.  We were running out of time.  So not very many.  Time was a real issue that day.  That’s a great DOCTOR WHO moment, isn’t it?  When River Song says, “I am your daughter.”

Why do you think Americans are now just catching on to the show?
MATT:  I think doing episodes in America and things like that are good.  What’s interesting is that there’s always been a core audience here.  It’s always been here.  It’s just with accessibility, the Internet, and stuff like that, it’s easier to let people know — and that’s what we’re trying to do.

In fact, there are billboards all over L.A.
MATT:  That’s great!  It’s great to hear that.  Very cool!