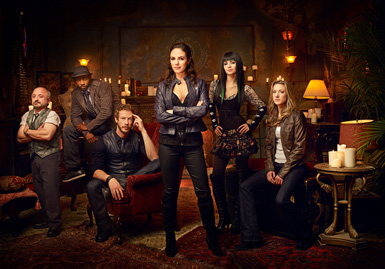 Perfectly timed to coincide with the much-anticipated second season premiere of LOST GIRL this Sunday September 4th on Showcase in Canada, theTVaddict.com was recently given the opportunity to interview series star Anna Silk. Unfortunately, since we don’t know our Silk from a Succubus, we clevery decided to pass along the exclusive one-on-one to our very own special LOST GIRL correspondent Melissa Girimonte, who was only too happy to take up the task of trying to squeeze some second season intel from the highly secretive Silk. See for yourself, after the jump.

Since discovering the truth about where she came from and the existence of the Fae clan, your character Bo has remained very neutral in terms of choosing sides. In light of the recent attack on the Elders do you think this upcoming second season will put Bo in a position where she might be forced to choose a side?
Anna Silk: Bo learned a lot in the first season and is now smarter and stronger coming into the second season. She also knows she has to be more accountable for her actions, that they have consequences and I think she is more conscious when it comes to navigating the politics [between the light and dark sides] and protecting the people that she loves, her friends and her family, Kenzi, Dyson and Lauren. I don’t know if she’ll necessarily be forced to choose sides, but I think there is something out there that is even bigger than Bo realizes and it’s probably more than she can even handle.

Now that Bo has learned the truth about who her mother was, is there any chance she’ll start to doubt her goodness knowing that she came from such malevolence?
Definitely she will. Bo learned what she is and who she is, well, more what she is at the beginning of the first season and now she is starting to learn who she is. She knows some of her roots, but there are still a lot of questions that have gone unanswered and I think she does question those roots. Some things that do happen during the second season — which I can’t give away — are definitely red flags for her and raise a lot of potential for evil. It’s a scary time for Bo.

In the second season premiere, Bo seems to have more control over her powers. Have we seen the full extent of her powers as of yet?
No we have not, definitely we have not. I don’t even think Bo has seen that yet and that’s all I’m going to say about that!

One scene that really stands out in the second season premiere is the one that has Dyson telling Bo what he gave up to help her out. There was a look between the two characters that kind of spoke to the fact that neither one of them realizes the extent of their feelings towards one another. Is it possible that their relationship has evolved beyond pure lust and into a more emotional connection?
Yeah I think so. That was certainly something that Kris [Holden-Ried] who plays Dyson and I had discussed. I think that Bo had never had a relationship before, she’d never been in one and here she is in this relationship with Dyson… and with Lauren as well. Two real relationships with lovers in her life that aren’t dying.

Speaking of Lauren, in that first episode back, there’s almost a caretaker vibe where Bo is caring for her, she’s under a lot of stress and strain carrying for the Ash. What I know a lot of readers want to know is are we going to see some more sparks between Bo and Lauren this season?
Bo and Lauren’s storyline has become so popular which I’m really proud of and I’m really happy about. There’s definitely more to come with Lauren and Bo this second season.

You’ve heard about the segment of the fandom that refers to the two of you as “Doccubus,” right?
[Laughs] I have, I love that. They call her, Dr. Hotpants or something? I called her that on set yesterday and she laughed.

Without of course giving too much away, is there a specific episode you’ve filmed that you can’t wait for the fans to see thus far?
Everytime we get a new episode it’s really exciting for us. We read it, we’re excited and there’s something new for the fans to learn so I think I’m just excited for the fans to see them all because there is such an arc this season for Bo and for all these characters. That said, our last episode, episode 9 for us, was something really challenging for all the actors, we were all on set together and it’s going to be a really funny episode. It’s going to be kind of a stand-alone episode because it’s a little bit different than what you usually see.

Would it be safe to see that the tone of the show is darker this season?
I think there is always that balance of having the sort of darker tone that the show has but also having a lot of comedy in there, but I think the theme of the second season and the sort of journey that Bo has to take is certainly not comical, it’s a really big deal and a really important journey for her, the people around her and for the Fae. There’s definitely a lot of humor in the show too, but there are some darker moments, more-so than first season.

Melissa is a Toronto-based TV blogger and music journalist. A TV fan since birth, it was only in recent years that she discovered her love for writing about what she was watching. After contributing to several online and print magazines as a freelance writer, she started her own TV blog, The Televixen, in 2008.