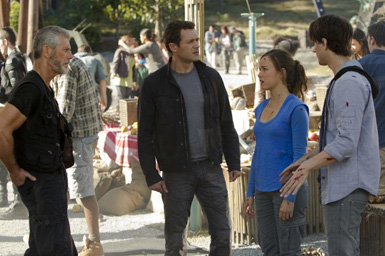 The real litmus test for any new television series isn’t so much the pilot episode — which in the case of TERRA NOVA was a showcase that afforded the Fox Television Network the better part of a year to finesse the series to their liking — but rather, episode two.

So just how did the cast and creative team follow up last week’s 14 million dollar dino-epic? By cleverly tapping into the cultural phenomenon that is angry birds and delivering an episode that wasn’t so much Avatar meets Jurassic Park but rather reminiscent of your classic STAR TREK adventure.

Take the episode’s big baddie for instance. Much like those weird aliens that used to inexplicably latch onto the Enterprise for some reason or another, last night’s birds were angry for a fairly legitimate reason. As it turns out, the colony that Terra Nova was constructed upon was none other then said aforementioned bird’s spawning ground. And while the way in which they decided to go about reclaiming their former love nest (Read: Kill them all!) may have been to the detriment of our intrepid colonists, it did give the crew colony, led by the increasingly awesome Dr. Elisabeth Shannon and Science Officer Malcolm Wallace — who let’s face it is 40 pounds shy of being called “Scotty” — the opportunity to in classic STAR TREK-style, feverishly formulate a way in which for Commander Taylor and Jim Shannon to save the day.

No, the episode wasn’t perfect. After-all, there was still the teensy little problem of eldest son Josh Shannon (Landon Liboiron), who when he wasn’t busy negotiating with a fellow colonist for a guitar (Seriously Fox, does the success of GLEE mean every show on your Network has to include a musical element?) was stupidly antagonizing a flock of demonic birds by throwing rocks at them. Not to mention the far more worrisome fact that the show’s two major missions that saw team Terra Nova first head into the jungle for specimens and second, lure the angry birds to a new nesting ground Pied Piper-style took place off screen in an obvious attempt to save money on special effects. That said, if last night’s second outing is indicative of what we can expect from the series as it moves forward, consider us engaged.