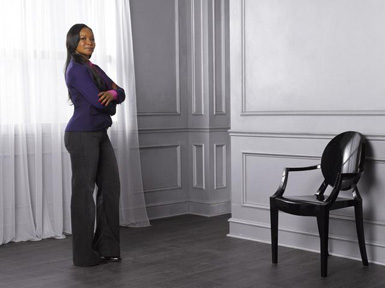 Attention CASTLE fans: Be afraid, be very afraid! Or at least that’s the distinct impression actress Tamala Jones — better known around these parts as Medical Examiner Lanie Parish — left with us following an exclusive one-on-one in which she teased what has the potential to be a terrifying Halloween episode. Particularly if you’re a fan of Detectives Ryan, Esposito and their respective relationships.

“In tonight’s episode, Ryan and Esposito, Ryan’s fiancé Jenny (Played by Juliana Dever) and Lanie all go out on a double date, but there’s a twist,” teased an audibly excited Tamala Jones during a recent on-on-one with the TV Addict.

And while Jones was naturally hesitant to let the proverbial cat out of the bag by revealing whether tonight’s twist is of the trick, or well, the treat variety (Except to say, “I think fans are going to be shocked and also very excited!”) she was only too happy to – much like her small screen alter ego — offer up her two [terrifying?] cents on the show’s other relationship. You know that little will-they-or-won’t-they waltz between Castle and Beckett.

“The thing about Andrew Marlowe our creator and executive producer is that he knows that if Castle and Beckett were to hook up anytime soon that would kill the heat,” explained Jones. “So he doesn’t write for Lanie to keep pressing the issue and kind of has her basically saying, ‘I’m not going to say anything more about it, I’ve said enough but you guys [Castle and Beckett] are going to hook up one day and I’m going to say I’m right!’ Which, I love because I agree with him [Andrew Marlowe]. If you hook them up too fast you’re going to kill that spice, we need that, that’s Castle and Beckett.”