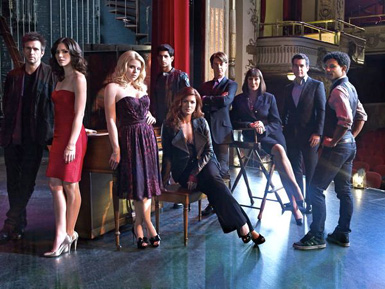 In the weeks leading up to tonight’s much-anticipated premiere, SMASH has been called many things by many people. Thus, rather than parrot an endless array of reports that have all pretty much pegged the series as GLEE for grown-ups or NBC’s last great white hope, we thought we’d take the more personal approach by proudly proclaiming the series to be simply this: The most exciting thing to grace our small screen in quite some time.

Based on an idea from Steven Spielberg, produced by Chicago’s Neil Meron and Craig Zadan and featuring songs by Broadway’s dynamic duo of Scott Wittman and Marc Shaiman (Hairspray), SMASH chronicles the dizzying highs and crushing lows that come hand in hand with developing a Broadway musical about the life and times of Marilyn Monroe. Of course, where things really get interesting — and by “interesting” we mean spine-tingling-cannot-wait-to-see-what-happens-next kind of exciting — is not so much with regards to the aforementioned creative pedigree behind the camera, but the remarkable talent in front of it.

Much in the same way that Aaron Sorkin managed to turn mundane topics such as drafting legislation and filibusters into pulse-pounding-edge-of-your-seat entertainment with THE WEST WING, creator/executive producer Theresa Rebeck does a SMASH-ing job of whisking viewers behind-the-scenes of the high stakes world of big Broadway musicals thanks in no small part to a colorful collection of characters that audiences will very quickly find themselves rooting for and singing alongside with.

Will writing partners Julia (Debra Messing) and Tom (Christian Borle) be able to get their Marilyn musical off the ground while at the same time managing to navigate their increasingly complex personal lives? Can Producer Eileen Rand (Anjelica Huston) raise the astronomical sums of money necessary to take this show from page to stage in the midst of an incredibly messy divorce? Will director Derek Wills (Jack Davenport) penchant for scheduling extra rehearsal time in his sprawling New York City bedroom backfire? And just how far will young ingenues Ivy Lynn (Megan Hilty) and Karen Cartwright (Katharine McPhee) go to snag the role of a lifetime that is Marilyn Monroe? These are just some of the plot points we found ourselves heavily invested in thanks to the rich world Rebeck has created. That is, when we weren’t busy marvelling at the production value and ambitious scope of this exhilarating new series.

Which is where SMASH really shines.

Unlike that other singing show, which after a strong start has all but given up on coherent storytelling and character development in lieu of weekly assignments whose main purpose is to generate splashy headlines or sell music on iTunes (This week on you-know-what it’s a Spanish lesson from Ricky Martin!), the production numbers performed on SMASH are an integral part of the story. From the cinematically staged musical numbers from the show-within-a-show that pulls back the curtain on what Marilyn the musical might look like should it be lucky enough to make it to Broadway, to more familiar modern-day tunes that sees the likes of Katharine McPhee’s Karen Cartwright totally nail an audition with her own rendition of Christina Aguilera’s “Beautiful,” the musical numbers don’t just mirror what the character’s are currently going through, they serve a genuine purpose in moving the story forward. A story which by the way — having already had the pleasure of previewing SMASH’s first four episodes — gets better and better as relationships are tested, stakes are raised, and characters make life-altering decisions.

And while it remains to be seen as to whether or not a compelling drama pulled off by an all-star ensemble is music to an audience’s ears that may not know the difference between a pilot and a playbill, we’re here to implore you that it should be. In a world of generic doctor/lawyer/cop shows — each more interchangeable than the next — SMASH dares to be different. Which in itself is reason enough to give the series a standing ovation. Grade: A

SMASH airs Mondays at 10PM on NBC (CTV in Canada). The series premiere can be watched in its entirety by heading on over to clicktowatch.tv