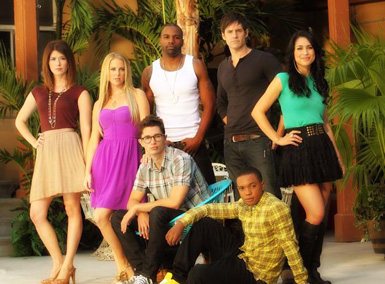 Parting is such sweet sorrow! Which is why, in recognition of tonight’s season finale of MuchMusic’s all-too-short-lived first season of THE L.A. COMPLEX, theTVaddict.com thought now might be as good a time as any to share a few choice words with executive producer/director Stefan Brogren, who we had the pleasure of catching up with on the set of the series some time ago. See for yourself, after the jump.

What was the genesis of the show?
Stefan Brogren: I directed DEGRASSI GOES HOLLYWOOD a couple of years ago and the network had a really good response to the fact that we were able to shoot about 90% of “Los Angeles” in Toronto. They also responded to Cassie’s [Steele] character, Manny at the time, and the idea of what happened to that girl when she got to Los Angeles. What trials and tribulations did she go through? So they started pitching us on the idea of trying to put together a series that maybe revolved around the idea of following these kids as they try to make in Hollywood, living week to week, and being this close to making it.

At one point was the decision made to turn what started out as a proposed DEGRASSI spin-off into an entirely different show?
As we went further and started breaking stories we realized that DEGRASSI’s Manny came with so much baggage and that it would be really hard to tell a story that already had so much of an established life. I mean what kind of stories could we tell when the character has already had an abortion by the time she was 14? It really just came down to wanting to have a clean slate. So once we decided that THE L.A. COMPLEX was not going to be a spinoff, Cassie had to come in and audition just like everyone else. And to her credit, after we auditioned everyone in town, she won the role hands down. It wasn’t just a gift to her, she really came in, worked it and earned it.

What do you think it is about DEGRASSI that has turned it into such a remarkable place for young actors and musicians to get their start?
I think a lot of it has to do with the fact that we get them when they’re young and it’s not a star vehicle for one person. Acting on DEGRASSI really is a group activity where you have to learn to work with others. If this place was an acting school, the one thing that they’re learning is to be giving to their fellow actors which I think is a big thing that a lot of young actors miss. Plus, they also get a lot of chance to experiment. We don’t keep characters on a certain plane, we put them through hell, which means there is always a lot of room to grow.

Back to THE L.A. COMPLEX, what do you think of the comparisons to MELROSE PLACE?
Our entire goal is to be the exact opposite of MELROSE PLACE. If anything, I would relate it to being the sadder side of ENTOURAGE. You have this party surrounding you at all times but you’re not invited. All of our characters are sort of watching from the sidelines. There’s a red carpet right there, I mean right there, yet they’re not invited. Or, they are invited, but have made some very wrong choices to get on that carpet. That’s the the whole thing when you’re down there, in Hollywood, you can taste it. You might even have friends who are starting to see success around you — like our character Connor on the show — he starts out the season in the fast-lane to success.

Are some of the trials and tribulations that those living in THE L.A. COMPLEX experienced similar to what you went through as a young actor?
Absolutely, and you’re always sort of second guessing how you’re supposed to do it. I was friends with Neve Campbell prior to her being on PARTY OF FIVE and she wasn’t even living in LA yet she got the job out of Toronto by putting herself on tape. And that’s the really frustrating thing about people living in LA — like Shenae [Grimes] and Nina [Dobrev] — you really have to sometimes come back here to make it big down there. The pond is so big there that trying to get even you foot through the door is difficult. LA is not really a starter town and the people that actually make it there are really putting in the time because it’s easy to get lost.