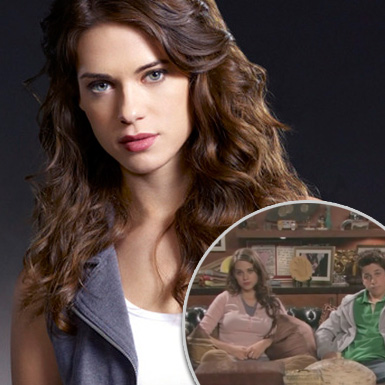 Do you fancy yourself a HOW I MET YOUR MOTHER fan that may-or-may-not have spent the better part of the past seven seasons scratching your head over who the identity of the titular mother is? Are you absolutely convinced that you’ve examined every single possible angle? Well, think again, because what we’re about to share with you is more shocking that Monday’s cliffhanger that saw Ted profess his love to Robin again!

What if Ted’s future wife is none other than his current small screen daughter Lyndsy Fonseca!

Would you believe that the idea of using the very grown up NIKITA star — who naturally bares more than a passing resemblance to footage she shot well over eight years ago — has actually been bandied about in the HOW I MET YOUR MOTHER writer’s room. “We thought about it!” explained co-creator and executive producer Carter Bays during a recent one-on-one with theTVaddict.com. “There has been the pitch on the table to make Lyndsy Fonseca the mother because she looks exactly like her and she’ll be nine years older or however much older than she was when the show began.”

And while Bays was quick to point out that such an outlandish idea probably won’t come to fruition (“That was just an idea, one that I don’t think we’re actually going to do.”) he did admit to having shot footage of Ted’s children for use when the big reveal does inevitably occur. “We definitely shot some stuff, crossing our fingers, knocking on wood that someday the show would be on at a time when they’re much older and we won’t be able to convincingly have the actors [Lyndsy Fonseca and David Henrie] sitting in the room a foot taller,” said Bays. “So yeah we shot some stuff that we had not used yet.”

Cooler still, clues as to the actual identity of the mother — you know, for those of who who are into that sort of thing — will be coming soon. Very soon. “More and more so as we move into the final phase of the show we’ll be starting to get to know her a little more before we meet her,” revealed Bays. “The episode we’re currently shooting that’s going to air in late February, we’re going to see a little more of her and get a little more information about the mother.”

HOW I MET YOUR MOTHER airs Mondays at 8PM on CBS (CityTV in Canada) and stars Josh Radnor, Jason Segel, Cobie Smulders, Neil Patrick Harris and Alyson Hannigan. Catch up on past episodes you may have missed for free online at clicktowatch.tv