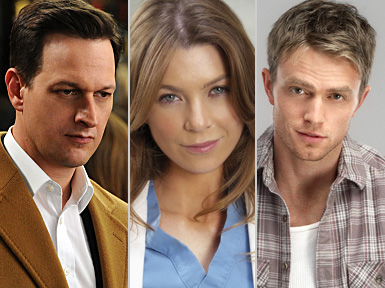 With contracts about to expire for the original cast members of GREY’S ANATOMY, I’m curious if you’ve got any insight into how Shonda Rhimes plans on ending the season? — Becca
The TV Addict: Living up to her reputation as smarter than your average showrunner, it would appear that Shonda Rhimes has cleverly found a way to keep her options opened. To that end, an upcoming episode of GREY’S ANATOMY’s will feature many of your favorite characters doing their best to make a good first impression when perspective suitors come a calling with potential job offers. And while we don’t pretend to know whether or not any of Seattle’s finest will find a permanent interest in working at, say, a hospital so small they have to fly their liver transplants to nearby Toledo, we are somewhat concerned that one of the docs may be inclined to take a second look at a certain Big Apple situated hospital that is rumored to have some of the best surgeons in the world knocking down its doors to get in.

I had no idea Tuesday night was the season finale of PARENTHOOD, is it coming back next year? — Christine
The TV Addict: It would be if I we here at theTVaddict.com had anything to say about it. Unfortunately — as evidence by the fact that PARENTHOOD’s fantastic third season was cut down to 18 episodes and ARE YOU THERE, CHELSEA? actually made it to air — we have very little sway when it comes to the Peacock Network’s programming priorities. That said, we would be absolutely flabbergasted if NBC didn’t renew one of their few critically beloved hour longs, if for no other reason than amidst the Network’s myriad of problems, PARENTHOOD is perhaps the least of them.

Any SUPERNATURAL scoop? — Ash
The TV Addict: Nothing outside of the show’s penchant for entertaining titles, which sees the 20th episode if of the season being referred to as “The Girl With the Dungeons and Dragons Tattoo.”

Will Raj’s romantic life ever catch a break on THE BIG BANG THEORY? — Billy
The TV Addict: What fun would that be? To wit an upcoming episode will find Raj head-over-in-heels in love with a beautiful software designer named Lakshmi. So what’s the problem you ask? Well, Lakshmi’s interest in Raj is limited to that of his ability to grow a beard. Read into that what you will.

Is Will Gardner really leaving THE GOOD WIFE? — The TV Addict’s Mom
The TV Addict: No Mom (Cue the obligatory eye-roll that comes with just about any and all TV-related questions asked by friends or family members). Just because Will Gardner has been forced to take a six month leave of absence in no way means he’s exiting the show. What he will be doing though is channeling his inner-Kalinda in a future episode when he lends a hand to Alicia and Julius, who are representing a man who was injured and lost his wife in a snowmobile accident against the always sly-as-a-Michael-J-Fox Louis Canning. 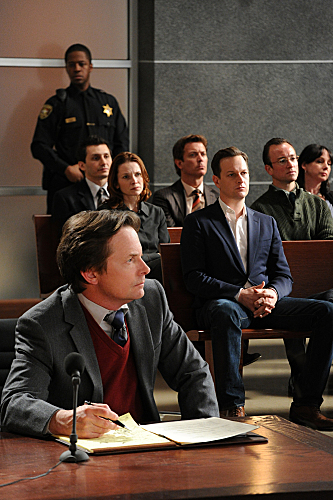 Any idea as to who Zoe will end up with at the end of HART OF DIXIE’s first season? — Brenda
The TV Addict: Ideas, we’ve got plenty! But since we’re hesitant to spoil what promises to be a very turbulent HART OF DIXIE season finale, we’ll simply leave it at this: Assuming of course Zoe goes through with making her romantic intentions known to either George and/or Wade, she will do so in an electric manner that harkens back very nicely to the show’s series premiere.

As much as I love me some ONCE UPON A TIME, I’m still reeling from the death of Sheriff Graham. Are there any plans at all to bring him back? — Lisa
The TV Addict: There are, but like anything in life, there are no guarantees. Said co-creator and executive producer Adam Horowitz during a recent press event promoting the season’s final string of episodes, “To be quite honest with you, I hope so.  We would like to have him back.  Sometimes it is a scheduling thing that is beyond our control, but right now we are trying to move heaven-and-earth to hopefully make it happen. But I can’t promise you.” Added co-executive producer/creator Eddy Kitsis, “The character was designed for this arc.  We knew coming into it.  We knew that when we were picked up the air schedule was that we’d do seven episodes and then go off for a Christmas break.  So we were like, “Let’s kill someone.” Because when Henry said in the beginning, “the final battle begins,” we as writers felt like if there weren’t stakes to this battle — if there weren’t casualties — people would start to think, “well, maybe it’s not that strong of a curse.”  So Jamie knew when he took the role that it was only going to be for seven episodes.  But when people — the reaction that they had was great for us because the other worry is that no one cares.  It’s like the old, “Oh, who cares?  They killed someone we don’t like.”  It’s like when it’s “a shocking death this week!” and it’s waiter number four, and everyone cries, “Foul!” and goes, “that’s bullshit, that’s not a real death.”  So we wanted to give a real death.  No one is more upset than us, we love Jamie.  Writing the Huntsman was awesome.”

Now that LOST GIRL has been officially renewed for a third season I was hoping you might be able to share a little something on what fans can expect? — Joanna
The TV Addict: Relationship melodrama galore! Which is to say, when LOST GIRL does return for its highly anticipated third season, fans can expect Bo’s romantic life to get even more complicated. Or at least that was our takeaway after our sources that let is slip that Producers have begun the search for a new series regular named Tamsin who is described as an up for anything, kick ass cop with a dark past. Also of note, actors hoping to nab what will surely be a highly coveted role on this increasingly buzzy series will have to be comfortable with simulated sex scenes with both men and woman!

Please tell me Julia (Debra Messing) is not going to rekindle her romance with Michael Swift and break up his beautiful family in the process on SMASH? — Mikey
The TV Addict: If you promise to not shoot the messenger, we’ve handily posted a promo photo from Monday’s scintillating episode just popped up in our email box. 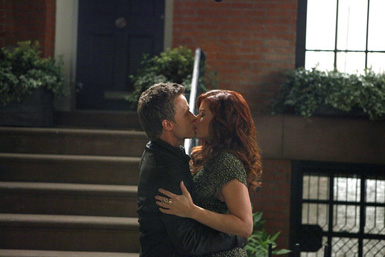