7:32PM: “He likes the show, he’s a great guy and a wonderful director,” said co-creator Steven Levitan on what brought BREAKING BAD’s Bryan Cranston to the show as a director. “It was a lot of pressure being directed by Bryan Cranston, because every time he gave you a note, you know he could do it better,” admitted Ty Burrell. Joked Eric Stonestreet, who also added that it was a nice full-circle moment having done a bit part on MALCOLM IN THE MIDDLE when he was first starting out in the biz, “We love meth, so it really worked out.”

7:35PM: “Every morning I get to wake up and get to come to this job is a highlight,” was how Burrell characterized his favorite moments from this past season. Julie Bowen, who plays Burrell’s on-screen wife concurred, calling the table reads a sneak peek at just how much fun their week is going to be.

7:38PM: So just what do the younger members of the MODERN FAMILY family think about their time spent on the series? Situated together on the far right of the stage actors Rico Rodriguez, Nolan Gould, Ariel Winter and Sarah Hyland pretty much all agree that the show is their second family with Winter amazed at how fast time flies, Gould calling out his on-screen mother Julie Bowen for constantly fussing with his hair and Rodriguez crediting the older cast members — particularly Ed O’Neill — with helping him become a better actor. Teased Jesse Tyler Ferguson “Just like we taught you!”

7:44PM: Co-creator Steven Levitan sights making sure all the characters are served throughout an episode that involves constantly inter-connecting story lines as the biggest challenge for the writers. In terms of on screen challenges, there seems to be a consensus among the cast that the physical stuff makes them a bit nervous, with Ferguson zeroing in on the ice-dancing episode, Burrell recalling having to walk a tight-rope and O’Neill referring to his time spent on the back of a horse with Eric Stonestreet!

7:57PM: When asked about the challenges that come with working with kids, Levitan was quick to point out that more often than note they know their lines better than the adults. Cue audience applause and hilarious fist-bump between Nolan Gould and Rico Rodriguez punctuated by another “Aaawwww” moment that saw Levitan admitting to how sweet it is to watch O’Neill and Rodriguez run lines before their scenes. 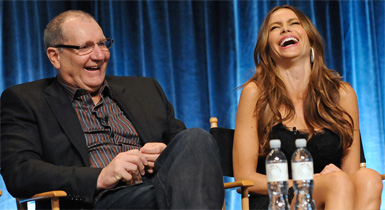 8:00PM: When the subject of the ‘groundbreaking’ same-sex relationship between Cam and Mitchell came up, Ferguson goes in for the hug, only to see Stonestreet mock push him away! Equally groundbreaking, at least according to moderator Cynthia Littleton, is the realistic way in which Gloria and Jay are portrayed. “When they first told me I was going to be paired up with, you know [pointing to co-star Sofia Vergara] I said well, that makes perfect sense!” joked Ed O’Neill. “Honestly though, I have to say Sophia makes it easy.” For her part, Vergara says their working relationship is fantastic and they have similar personalties… expect of course when it comes to the newest member of the Pritchett family, that little dog. “I hate that dog!” admitted Vergara. “I grew up in Columbia with big dogs that sleep in the yard, they don’t sleep in your bed like Paris Hilton!”

8:05PM: Levitan calls the show’s docu-style crucial, allowing the series jump through exposition and the writer’s to put you inside the character’s head. “It’s a wonderful device and the cast is all so good at it,” said Levitan. “That’s where a lot of the improv happens. We wouldn’t dare of chopping it.”

8:07PM: “There’s a lot of pressure watching the show and realizing that I’m never going to be that good of a parent,” said Burrell on his small screen alter ego Phil. “When my daughter loses her virginity I’m just going to show her that episode [referring to the recent episode revolving around Phil discovering oldest daughter Haley was no longer his delicate flower] and say aren’t I great, we all learned a lot!” Added Levitan, “I do a lot of my parenting comparisons with Phil and I feel like I’m falling short.”

8:12PM: Despite trips to Hawaii, a Dude Ranch, and an upcoming jaunt to Disneyland, audiences will have to wait to get a glimpse of Cam’s much-talked-about family farm in Missouri! “I’ve been saying that’s the best idea forever,” said Stonestreet. “I’d love to see Gloria in Missouri.” Added O’Neill on the subject of Cam’s family, “We have Cam’s father [Played by Barry Corbin] coming to visit and he and I don’t really get a long.”

8:13PM: Would MODERN FAMILY ever jump at the chance to shoot shorter 13-16 episode seasons? Hells to the no! “The reason we wouldn’t frankly is because of the kids, we’ve tried to stop them from growing and it’s not working!” admitted Levitan as Sarah Hyland hilariously and somewhat inappropriately points to her younger co-star Ariel Winter’s ever-expanding mid-section. “For that reason alone we want to get as many stories as we can while we’re going through these years I think we’re going to try and maintain this pace for as long as we can.”

8:15PM: “We love the little girls who played Lilly but they were just not happy to be there,” said Stonestreet on Lilly 2.0. “They would see Jesse and I and start screaming only to turn back into little girls when they left.”

8:18PM: “I look forward to the day when this is not a revolutionary couple,” said Ferguson when asked to talk about his onscreen pairing with Eric Stonestreet. “But I’m so grateful that I have a partner in Eric who is so careful in his meticulous portrayal and writers that treats them with such dignity, respect and puts them in the same situations as any other character.” Added Stonestreet, “Sometime through my interests — Jesse doesn’t attend NASCAR races with me — there’s nothing more gratifying when I have a guy carrying a giant tire, or gas tank, who comes up to me and says, ‘My wife and I love your show, where do you get those shirts, my wife is always trying to dress me as Cam.’ We’re opening peoples minds and hearts to realize you don’t have to be a man and a woman to be in a happy and healthy and loving home. Of course that’s not the show’s agenda, it’s to make people laugh and through that I firmly believe comes change.” For his part Levitan couldn’t be prouder, revealing that you wouldn’t believe how many letters the show has gotten from gay teens who were able to come out to their parents who fell in love with Mitchell and Cam. Said Stonestreet of a young man who came up to himself and Ferguson at an event “The first thing my mom asked after I came out to her was are you a Mitch or a Cam?”

8:27PM: Julie Bowen revealed that Greg Kinnear constantly tried to slip her the tongue when the subject of guest stars came up. For his part Ed O’Neill is a big fan of Manny’s bio-dad Benjamin Bratt calling him a “great actor and great guy,” while Sarah Hyland called the upcoming Disneyland-set episode very special because it afforded her the opportunity to work with her real-life boyfriend Matt. Guest stars that the cast would like to see on the show including Ariel Winter’s “nerd crush” Andy Samberg, while Gould and Rodriguez chime with Emma Stone.

8:37PM: “There was a lot of pre-lash and all these people got up in arms,” said Levitan on the media circus surrounding the episode that saw Lilly say the F-word. “Then everyone saw the episode and it went dead silent, there wasn’t one criticism because there is not a family on this planet that can say that hasn’t happened to them.” Added Stonestreet, “I think people how had a problem with the episode opted instead to watch someone’s eyes get gouged out on CRIMINAL MINDS!”

8:39PM: On just how long MODERN FAMILY can continue “As long as it’s good,” said Levitan. “Honestly, we haven’t even talked about it and I think I can speak for everyone when I saw that we would like to go out strong and not limp out. As long as it’s fun and good, so who knows, hopefully a long long time.” 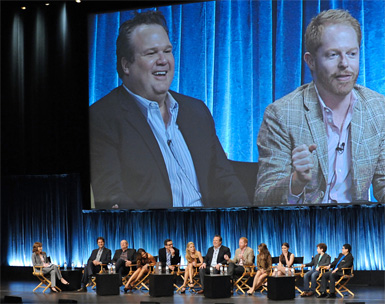