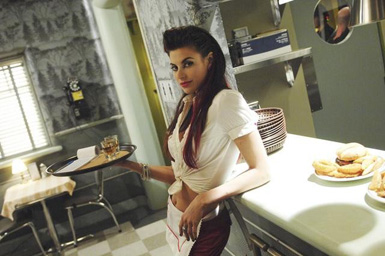 Evidently co-creators Adam Horowitz and Edward Kitsis weren’t kidding around when they promised that ONCE UPON A TIME would deliver a modern twist on the fairytales audiences have come to know and love. Case in point, last Sunday’s episode of the increasingly addictive ABC series that culminated in a big bad twist on the classic tale of what would turned out to be not-so-little Red Riding Hood! But just what did Red’s portrayer, the striking Meghan Ory think of the dramatic re-write? Well, we recently had the pleasure of catching up with the talented actress to find out just that in addition to what other surprises might be up Red/Ruby’s sleeve as the show gets closer and closer to what surely will be a very exciting first season finale. See for yourself, after the jump.

You’re kind of the hot topic of conversation in the ONCE UPON A TIME world right now.
MEGHAN:  I guess so!

So how long have you know about the juicy nugget that you’re the big, bad wolf?
MEGHAN:  I’ve know for a little while.  A few episodes in, the boys called me up and said, “Guess what?  You’re the wolf!”

When you auditioned to the show, they didn’t say, “Hey, by the way . . . “?
MEGHAN:  They did not tell me.  They did not.  I think it might have changed a few things about my audition perhaps.  But it was very exciting when I found out.

What did you think when they first told you?  Did you think, “Oh no!” or “Oh, cool!”?
MEGHAN:  I was intrigued. I thought it was a really cool twist and something that most people probably wouldn’t see coming and it was kind of something different for the show too.  So I was pretty excited about it.

Did it start informing your performance once you found out?  As far as changing the way you were portraying Ruby?
MEGHAN:  A little bit.  But not too much.  I had a pretty good idea what I wanted to do with her.  And also since we hadn’t seen the wolf in Storybrooke, it was more a Red thing, and we hadn’t seen Red that much.

Have they clued you in on whether Ruby can transform in Storybrooke, or is that part of the curse?  That isn’t something she has to worry about?
MEGHAN:  Well, I think that’s going to be a very interesting story to find out about.

It also seems in this last episode “Red-Handed,” Ruby was starting to wake up to the possibilities of life.  But then she kind of retreated from it once she realized that she did not know as much about herself as she thought.  Is that something where we’re going to start seeing that duality?  Where she’s challenged to still seek things out, or is she going to want to hide in her shell a little bit?
MEGHAN:  I think she’s definitely gained quite a bit more confidence.  Ruby has a very interesting relationship with Emma, and she looks up to her a lot.  So I think Emma would instills that bit of confidence — that she had anyway, but she was scared.  And I think that gives her a lot more faith in herself.  She just needs to figure out who she is and what she wants.

Is she going to be a bit more subdued now?  It looks like she changed her wardrobe and her coloring (her makeup and stuff) when she returned to Granny and said she was coming back?
MEGHAN:  I think Ruby is very attention-hungry just to feel better about herself, and I think now she is okay with figuring out who she is and she doesn’t need to show off as much, or get as much attention.  Just have people like her for who she is, and not just being trashy.

Has she completely given up on her deputy-skills with Emma?  Does she still want to do some of that?
MEGHAN:  I think she’s pretty happy at the diner with Granny.  She realized what’s important in life and that doing something that is important to you with people that you love is a pretty big deal.  So I think she’s happy where she is now.

We also saw that she kind of had a spark with August.  Is that something that they are going to play up? Is there possibly something romantic in the air?
MEGHAN:  I don’t know!  I think Ruby’s pretty intrigued by August because — like Emma — he’s from the outside.  And that’s definitely enticing for her.

Ah, there may not be a Peter around because she ate him in the fairytale world.
MEGHAN:  Peter might be gone.  [Laughter]

So what we’re now going to be curious to see is if Ruby is going to interact more with Mr. Gold and Regina because it seems like she’s become a power-player in this world.
MEGHAN:  We’ll see. . . I’m definitely also very curious to see what’s going to happen with that  I would love to see a little Ruby/Regina and Gold action.

She might suddenly be the surprise element they were not expecting.
MEGHAN:  Yeah, you never know!

Are we going to see more stories involving Red in the fairytale world?
MEGHAN:  I think so.  Now that we know that Red is the wolf, that is going to play a big part in the future.

Does she have some fun adventures with Snow that you can talk about?
MEGHAN:  There’s definitely some. Red and Snow are good friends and they stick together.

Have they completely left Granny behind in the fairytale world, or will Granny come back into play on that side?
MEGHAN:  I think we’ll see more of Granny. She’s Granny!

What for you has been the most fun thing to do in both these roles?  You’re playing these interesting characters that have kind of taken everyone by surprise.
MEGHAN:  You just said it.  No one really saw that coming, I think, and the opportunity to play two totally different characters, but they’re actually the same character and they are both going through incredibly life-altering transformations.  It’s a pretty fantastic gift to be able to play that.

When you had to the scene when Ruby opened the jewelry box and inside is a heart, how was that? What was going through your mind to react to that scene?
MEGHAN:  Well, they actually put a prop part in there and it look really, really real.  So it wasn’t that difficult.  [Laughter]

I know you’re not really allow to speculate what’s going on in this world, but where would you like things to go for Ruby and Red outside of what you already know?
MEGHAN:  I definitely would like to see how they both deal with their life-altering experiences.  For Ruby, to see what she does with her new lease on life and her take on things, and maybe find somebody who loves her for her.  I think that is something that would be pretty nice.  And for Red, who is dealing with her loss and the tragedy of what happened.

Are we going to see how that starts coloring who she is?  The fact that somewhere deep inside she feels a profound sadness for what happened to her?
MEGHAN:  I think so.  I think that Red is definitely more serious in the later episodes that we’ve seen already, than when she was just with Granny, and I definitely thing that’s going to play a part of her story.

Finally, what would you like to tease for the fans as the rest of the season plays out?
MEGHAN:  I’m very excited to see the “Wonderland” episode.  I saw a few scenes from it and it looks pretty beautiful and amazing, and the Mad Hatter, looks pretty cool!

ONCE UPON A TIME airs Sundays at 8PM on ABC (7PM on CTV in Canada) Catch up on past episodes you may have missed for free online at clicktowatch.tv