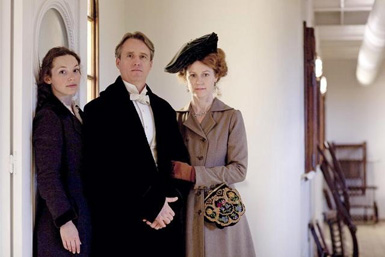 Perfectly timed to coincide with the 100th anniversary of one of the world’s most infamous maritime disasters, this weekend sees ABC unveiling the two-part BBC produced mini-series TITANIC. Written and produced by Julian Fellowes (known for both his work on “Gosford Park” and more recently DOWNTON ABBEY), this new tale of the Titanic and the lives it engulfed seeks to remind audiences that people from all walks of life were caught up in the maelstrom of the epic disaster. In an exclusive interview, star Linus Roache provided a few insights to his character the Earl of Manton and what he remembers most vividly about filming this tragic event for television.

This is a big achievement for a television series, even for a mini-series.  What was it like to work on something this huge and so classic?
LINUS:  I think that’s a great question.  I think that’s why I was attracted to it.  I just got the whole thing, even before I read the script.  They were going to do a piece of event television that’s going to air actually on the centennial of the Titanic’s maiden voyage and sinking to commemorate and celebrate the whole event and sort of bring the whole world together, if you like, to watch it together and remember it.  So I loved the idea and for television, you’re right, it’s pretty epic and big scale.  It’s very big budget for a British drama. We were forced to shoot it outside the U.K. for financial reasons, so we ended up shooting in Budapest in studios there.  But the set was just incredible. It was sets of 3 floors and levels: the Promenade deck, the lifeboat deck, all the different compartments and cabins, and a lot of work in a water tank with sets that were built to slide into the water.  The other thing that we did not see, until we were finished, was the quality of the CGI is I think incredible.  It looks as good as the camera in terms of the way CGI is working.  Obviously it is not the same scale as a camera movie, but it does deliver as a piece of epic disaster-movie television making.

Did you just want to kind of pinch yourself when you started working on it because it was like a dream-come-true to work on something like that?
LINUS:  Not quite, I have to say.  I’ve been around quite a bit now.  I just love variety. I love being able to do different things. Do period pieces and sci-fi.  I love being able to move between genres and be flexible.  And it’s just been a long time since I’ve done anything out of the U.K.  It’s a long time since I’ve done period drama, and to be invited to be part of something Julian Fellowes is doing is, of course, like, “This is fantastic!”  It’s a no-brainer.  DOWNTON ABBEY hadn’t been the international success that it had been when I signed on.  It was successful, but it hadn’t really gone international at that point. But I was a big fan of Julian’s from “Gosford Park.”  So the fact that he was the writer was like, “Wow!”  I’m honored to be included with this incredible cast and on this project.

You play one of the core characters, as Hugh, the Earl of Manton and he has a secret that may come back to bite him as these events unfold.
LINUS:  All the characters have hidden stories and secrets.  I’m actually playing a fictitious character.  A lot of the characters that are portrayed are actually real and did exist.  But mine is fictitious one and he is hiding something.  It comes out pretty quickly in the first episode.  The question will be: how can he resolve his marriage within 2 and 1/2 hours.  So it’s one of those devices Julian Fellowes used for all the characters that basically in the moment of crisis will come to the surface – their backstories and what people are hiding and holding onto.

Do you think Hugh rises to the challenge because of this big moment that happens?  That he becomes more of a heroic character and cherishes his family?
LINUS:  Yeah, I do.  It can take people either way, a crisis can’t it?  None of us know what we’re made of until we’re in that situation.  But he does seem to rise to the occasion and you see what he’s really made of.  I liked the story arc and what Julian gave me as a character. I think the interesting thing for me, as an actor, was exploring that sense of entitlement of that era. It’s hard to relate to now, but what’s it like to be an English lord at the height of the British Empire, two years prior to the first World War.  You’ve got servants, your life is determined, your time is your own — what you want, when you want —  and trying to relate to a life like that.  It’s hard to relate to.  I think that was a fascinating challenge for me, a character like that — to understand and play that.

Now that you’ve played the character from beginning to end, what did you most admire about him?
LINUS:  I kind of felt, whether it comes across or not remains to be seen, but I felt in the midst of his status there was something good and decent about him.  Honorable.  And I liked that because even though he’s got a checkered past and has not lived a perfect life, particularly when we judge it by modern standards.  In those times, I think having a mistress was not even looked down upon.  It was what people did.  But I think his sense of honor is what I admire.

It was such a huge experience, and you did a lot of water-work and things like that.  What stands out in your mind as the biggest thing you got to do while working on the film?
LINUS:  Trying to not look like I’m sweating when I’m running around the deck of a ship in a big winter coat in Budapest in the middle of summer pretending you just hit an iceberg.  That was the ongoing challenge for everyone:  how to look cold.  That’s one of my lasting memories of the whole shoot is we’re all grabbing onto fans to cool us down and wiping each other’s sweat off.  But the other thing was it was fun to do water tank stuff.  I’ve never done that before, and there’s one sequence we do toward the end were we’re trying to get this collapsible lifeboat off, which was the last boat to get off the ship, and we just had to repeatedly be dunked into the water to go from dry to wet each time we did it.  So the challenge was  that we’d do the sequence, then we’d get out, get dried off, re-do the makeup, re-do the hair, put clean clothes on, dry clothes, and go back and do it all again.  It was a bit monotonous, but the actual moments where we did it was actually a lot of fun.

What do you think the audience is going to identify with, with this new version of TITANIC?
LINUS:  I think they are going to identify with the mass of humanity that was on that ship.  It was not just one romance, it was all these lives that were brought together in such a confined space and then they were all challenged to face their mortality.  So it’s like looking at the world in the microcosm and its very human.  It’s very engaging storytelling and I think they way you’re going to view it in the U.S. is better than how they did it in the U.K., to be honest, because you’re going to see it all over two nights, which I really think is the way to do it because you’ll feel the cumulative effect of each episode — all these different stories colliding together.  But by the end of it you’ve got this massive mass of humanity coming through in a great crisis and that’s great drama.

To see the stories as brought to life in Julian Fellowes’ TITANIC, be sure to tune in for the 2-part mini-series on Saturday, April 14th at 8 p.m. and Sunday, April 15th at 9 p.m. on ABC.  (To find out more about the mini-series, visit ABC.com)