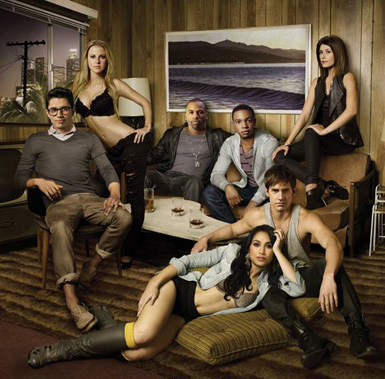 It is a special achievement when an American television network picks up a foreign television series for broadcast in the U.S.  But THE L.A. Complex is no ordinary series.  It is a Canadian series that has the audacity to depict the trials and tribulations of six struggling entertainers in sunny, cutthroat Los Angeles, California.  The Toronto-filmed series smartly incorporates scenes and settings from the L.A. amongst their own colorful city images.  The show captures the vibrant energy of the “city that never sleeps” and focuses tightly on its youthful, charming and bound-to-succeed-no-matter-what-the-cost ensemble of characters.

Initially the series is introduced through the eyes of wide-eyed singer/actress Abby (portrayed by DEGRASSI’s Cassie Steele), and then branches out as Abby’s path crosses with various struggling artists all seeking to crack into the entertainment industry, which includes:  Connor (Jonathan Patrick Moore), the golden boy who just landed his first starring role in a television series; Alicia (Chelan Simmons), an aspiring dancer who never seems to get a break; Tariq (Benjamin Charles Watson), who has dreams of producing music but ends up being treated as more of an errand boy; Nick (Joe Dinicol), the comedian who cannot find the inspiration to write truly funny material; and Raquel (FIREFLY’s Jewel Staite), a former successful actress desperately trying to get a second chance at stardom.   As Abby’s life spirals out of control, it brings her smack into the path of this eclectic group of entertainment hopefuls.  All it takes to succeed is one right move and as the lives of Abby, Connor, Alicia, Tariq, Nick and Raquel intersect, their stars begin to align.

THE L.A. COMPLEX is all about the mind-set that takes hold when one is determined to pursue their dreams, at any cost. Each falls sway to “the L.A. complex,” a state of mind that drives the young, beautiful and bold to make it in a world where thousands never succeed.

The series sounds and even looks initially like one of the myriad of reality shows scattered across the television landscape.  But it is not.  It is a carefully crafted story written about characters all reaching for their dreams.

Taking a few minutes to chat about the show and their characters are stars Jonathan Patrick Moore and Andra Fuller. (Note: Andra’s character Kaldrick King is introduced as a mega-star musician whose crosses paths with Tariq in the second episode.)

As can be seen, Jonathan and Andra are enthusiastically proud of their series and are looking forward to working on the second season of THE L.A. COMPLEX, which will air later this year.

THE L.A. COMPLEX takes us into a world of piercing desperation and determination, and offers an insightful, charming and exuberant look at how these young hopefuls find a way to conquer their fears, nepotism, and crack open the door long enough to grasp a chance at success.

The show may sound like a familiar tale of broken dreams in the City of Angels.  But what really sells it are the fantastic hooks that end each episode.  Each hook reveals a shock and tease of another layer to the story.  It is clever and highly addictive.

If you have not already seen the pilot episode online, you are invited to tune in for the premiere of THE L.A. COMPLEX on Tuesday, April 24th at 9PM on The CW (MuchMusic in Canada).