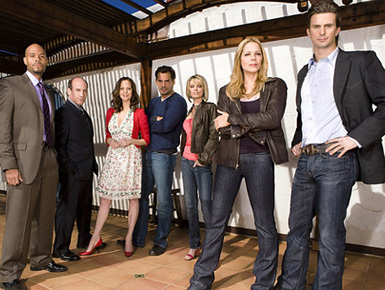 The hardest thing a television series will ever do is find a way to successfully close its series and leave fans feeling both satisfied and yet wanting more.  As a special treat and heart-felt “thank you” to its loyal fans, IN PLAIN SIGHT used its last eight episodes of its final season wisely and created a number of story arcs that would tie up the series neatly with a bow on top: including the final fate of the Albuquerque WITSEC office, bringing back Mary’s long-lost father, and previewing how its key characters would move forward in their lives beyond the finale.

In this week’s episode, the show has one last chance to resolve one of the biggest storylines that the show has dangled before viewers for five years: Mary and Marshall’s relationship.  The show perhaps never intended to become a “will they or won’t they” story, but as the episodes played out year-after-year, there were always a few bread crumbs teasing the possibility of romantic feelings between the feisty Mary Shannon and her loyal partner Marshall Mann.  With the finale in sight, the show ramped up the romantic tension by having Marshall propose to his long-time girlfriend Abigail, which helped spotlight how unusually close Marshall and Mary have become during their tenure together in WITSEC.   At the end of last week’s episode, as Marshall abandoned his own engagement party to rush to Mary’s side after her father died, even Abigail could no longer ignore how close the two partners have become and it makes her wonder if there is any room in Marshall’s life for her.

Also unresolved is whether there will be a WITSEC office in Albuquerque for much longer as government cut-backs have forced division closures around the country.  What strain will that place on Mary and Marshall once they find out that their jobs are on the line in addition to the pressures of Marshall’s pending nuptials? Fortunately, Mary has been blissfully unaware of the increasing tension surrounding her.  Consumed by the sudden reappearance and then the equally sudden demise of her career-criminal father, plus the added responsibilities and challenges of being an unwed mother, Mary has been free of the worries of whether her job is on the chopping block and whether her partner may suddenly be transferring away.

IN PLAIN SIGHT also knows that it has one last chance to spotlight the incredible work that WITSEC inspectors do on a daily basis to not only keep their protects and witnesses safe, but to help them transition into their new lives — cut off from everything and everyone they used to know.  So as its final hurrah, IN PLAIN SIGHT chose to showcase the tale of a young model who cannot truly adjust to the last curveball life has thrown at her.  She wants to do the right thing, but the weight of responsibility proves to be a heavy burden.

So the show does what it does best, it throws Mary into the maelstrom and watches how deftly and easily she manages the chaos.  She is not just a WITSEC inspector by day and single-mother by night, she is a woman entangled in more lives than she realizes and she is the pivotal piece that ties them all together.  At work, Stan, Marshall and Delia circle protectively around her demonstrating a level of affection that reveals how much like family they have all become.  At home, Mary has her daughter Nora, her ex-husband Mark, her mother Jinx and her wayward sister Brandi.  Mary creates the safe-haven for all of them as they all need someone to ground them in this crazy world when lives pressures threaten to consume them as well.

IN PLAIN SIGHT knows that the secret to life is the relationships we build — whether they are relationships created by blood, through our jobs, by choice, or even haphazard circumstance. Interestingly, Mary Shannon’s life is filled with complicated, yet rewarding and enriching relationships.  She may try to brush those aside and pretend she lives free and unfettered, but our relationships define us.  It is what helps anchor Mary so that she can provide the support needed for each of her WITSEC protectees.  She may deny on the surface how valuable human connections are, but in her heart, she instinctively knows that rebuilding and securing strong support systems will be the one thing that saves each of her witnesses from falling apart under the pressure of transitioning into their new lives.  She is a vital life-line that gives them the strength to reach out and connect again.

It is the example of Mary and the tenacity with which she fights for those she cares about and takes under wing that draws the lost and lonely to her.  They feel the unspoken love that she offers, despite the sharp, snarky verbiage that she uses to try to protect herself with and to dispel the idea that she cares too much.  But in Mary’s case, words cannot hide her golden heart.  She instills instinctive trust in those that place their lives in her hands, and it binds those who care about her tightly around her.  Love is a protective shield and a powerful weapon.  Mary may not think of herself of as crusader of love, but she understands the vast variety of love that a person needs to let go of a former life when needed and to rebuild another one.  Love may be found in family, friends, co-workers, romantic relationships, and intellectual pursuits.  It is the passion for life and participating in it with like-minded people — someone to share it with.  The value of human connection, in all its forms, not only makes us human, it gives us the drive to live our lives fully.  It gives us something to fight for and to cherish.  Is it any wonder that Marshall is conflicted about his feelings for a woman who lives her own life so passionately?

For fans anxiously awaiting what lies ahead in the finale, in the end, the issues of Mary and Marshall’s feelings for each other and the fate of the Albuquerque WITSEC office are dealt with swiftly and in a surprising and welcome fashion.  The past five years of IN PLAIN SIGHT offered a window to peek into the lives of Marshall, Mary, Stan, Delia, Abigail, Jinx, and Brandi.  As the finale reveals, they will all continue to live their amazing lives for a long time to come; it is only that our journey with them ends here.  It may be time to say goodbye; but for fans, we know this is not the end.  These rich, intoxicating characters will to live unwritten stories well into the future.  May we be so lucky to get to visit from time to time.

So pull out your kleenex boxes, the IN PLAIN SIGHT finale offers a warm salute to its characters and its fans. Tears will be shed, there will be laughter, and there may be a few choice words from Marshall as he tries to capture the feelings that we will all experience during this last hurrah.  Enjoy and celebrate.  It has been a tremendous 5 year journey that we were privileged to share with them.  It is now time to say good-bye.  Thank you, IN PLAIN SIGHT!

In case you missed these interviews, here are a few final words from the cast:

The IN PLAIN SIGHT series finale airs Friday, May 4th at 10PM on USA Network.