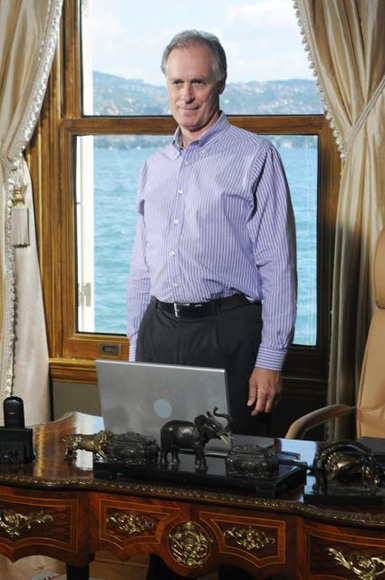 After last week’s jaw-dropping reveal that the criminal mastermind behind Michael’s abduction was his own godfather and former CIA director Martin Newman , it is hard to imagine what exactly Martin is up to.  With only two episodes left this season, the series promises to keep up its break-neck pace and throw as many more curveballs out as possible.  In an exclusive interview, co-star Keith Carradine took a few minutes to talk candidly about his surprising role and the fun he has had filming MISSING in the exotic locales of Eastern Europe.

After last week’s big reveal that Martin is “Suspect Zero,” can you finally talk about whether you knew all along or was it as big a surprise to you when you got the script?
KEITH:  Well, let’s just say I knew the basic premise.  I was given a sketch of my character’s background and his relationship with Becca, but I really wasn’t given the full details until I arrived in Prague, in the Czech Republic and I met with Gregory Poirier and Gina Matthews.  They said, “So we’ve been talking about whether to let you in on this or not.  We’ve decided to let you in.  Here’s the deal.”  So I did know all along, which I appreciated, because as an actor you like to be able to preview it behind the scenes as you go along.

Do you think at any point it was coloring your performance in how you reacted to the other characters, or were you just cautiously portraying your character?
KEITH:  Well, I think knowing who you are and what is behind what you are doing, that’s part of the fun of doing especially a show like this in this genre.  There are so many layers and there are so many secrets to be revealed, and so many secrets that people are keeping as they’re talking to one another.  That’s part of the fun as a performer — being able to layer that in underneath.  If the audience has an opportunity to go back and review these episodes again, they’d see all kinds of little clues. I mean, we all enjoyed it when we saw “The Sixth Sense.”  You saw that movie for the first time and you wanted to go back and see it again so that you could see all the little clues that sort of led you to where it was going.

It was a fun surprise!  Would you have preferred that Martin stay just being a retired CIA director writing spy novels, or do you just love the fact that he became a criminal mastermind?
KEITH:  Bad boys are fun.  We, as actors, most of us will admit that it’s more fun to play the villain; and this guy, it’s a very juicy part.  It’s very well written and the reveal is so deftly accomplished by Greg Poirier.  I think it’s an extremely well thought out bit of drama.

Is there anything you admire or like about Martin, or at this point are you kind of enjoying the fact that there’s nothing redeemable about him?
KEITH:  I admire his worldliness and I admire his accomplishments.  I mean, he’s a very accomplished man.  He’s led a rather extraordinary life.  The fact that he seems to have gone to the “dark side,” that did make him more interesting.  [Laughs]

So are we going to be surprised at who else he has recruited into his organization? Are there more surprises that reveal who might be working with him?
KEITH:  That’s a “stay tuned, ladies and gentleman.”  Yes, I think what is yet to be revealed be very interesting to the audience.

So there’s more big twists and turns out there for us?
KEITH:  Oh, yes. Absolutely!

For you, working on this 10-episode series, what was the most fun experience working on it?
KEITH:  For me, it’s all about the people.  I look at who’s involved.  It’s is hard work, granted, we did go to exotic places and the travel aspect was certainly very interesting and I’d never been to the Czech Republic before. I’ve worked in Europe over the years, but never worked in Eastern Europe.  I have been to Eastern Europe a couple of times when my wife was filming in Bulgaria, and I visited her there.  But it was my first experience filming in the Czech Republic and it’s a fascinating country.  Prague is a beautiful city and Istanbul was just fascinating.  But the bottom line is that when you have this much work to do and this much time to spend doing it, the only thing that really matters is the experience day-to-day and the people with whom you’re working with.  So that was the real upside for me.  It’s a terrific bunch of people.  We do these things and we never know.  We do our best and we hope it’s going to be good in the end, but sometimes the magic works and sometimes it doesn’t. In this particular case, the magic has worked beautifully.  But ultimately, all one takes away is the experience of having spent that time doing the work with that group of people.  So I would have to say that was the highlight for me — working with everyone involved.

Assuming that they don’t kill off Martin, would you be up for coming back next season?
KEITH:  [Laughs] Well, we’ll have to see, won’t we!

So just speculating a bit, do you think Becca has been a complete thorn in Martin’s side, or did he kind of anticipate some of her maneuvers and kind of orchestrate some of that?
KEITH:  I think he adores her.  I think there’s a deep love there.  When he says, “You’re like a daughter to me,” it’s the truth.  And I think he takes great pride in having mentored her into becoming the extraordinary woman that she is, and the incredibly accomplished operative she was and apparently still is. So I think it’s a very complicated relationship.

But he didn’t mind kidnapping her son and putting her through that psychological torture?
KEITH:  Well, the psychological torture was probably out of Martin’s hands.  I would sort of abdicate responsibility for that.  You oversee a group, a company, and you can’t take complete responsibility for every decision made by your underlings when you’re not there overseeing it or managing.

So events may have gotten a little beyond the scope of his original plan?
KEITH:  I think Martin is venal, but I don’t think he’s necessarily cruel.

Okay, so what would you recommend that we pay close attention to with the final two episodes coming up?  What should fans be anticipating?
KEITH:  There is, obviously, a great deal to come  Becca and Paul are working towards escaping from Europe and finding Michael, and my relationship with Michael has yet to be fully fleshed out in terms of his perception of who I am.  I think that’s going to be fascinating.  And then you’ve got the actual full time operatives, Dax and his mission to try and unravel everything that has been taking place so far.  It should be very entertaining. And we do ultimately end up in Turkey, at some point.   Plus, who Violet turns out to be and how deeply she is involved in all this is absolutely going to be fascinating for the audience.

To see what kind of game Martin has been playing and who exactly is in on his nefarious plans, be sure to tune in for the penultimate episode of MISSING on Thursday, May 10th and the finale on May 17th at 8:00 p.m. on ABC.