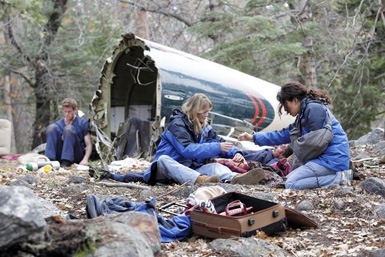 Still reeling from last night’s uber-intense GREY’S ANATOMY season finale that left many of your favorite character’s lives “hanging in the balance” following one of the most memorable plane crashes since the fateful day Oceanic Flight 815 took flight? This TV Addict certainly is, but probably not for the reasons you might think. For as it turns out, we have found ourselves spending the better part of the day not so much mourning the death of [Spoiler Alert!] Lexie Grey, but rather the loss of what could have been a far more shocking conclusion had ABC put in a little more effort.

But before we get to that, let’s first take a moment to commend showrunner Shonda Rhimes and Co. for one helluva season. Not only did the GREY’S ANATOMY writing staff do a marvellous job of crafting a season under the very difficult circumstance that is not knowing which of your cast members will be returning the following year, they managed to do so while building in an organic and believable exit for any cast member should they have opted not to return.

Our issue, was that last night’s send off could have been that much more thrilling had ABC proactively decided to formulate a plan to keep a lid on the status of the contract renegotiations for cast members Ellen Pompeo, Patrick Dempsey, Sandra Oh, Justin Chambers, James Pickens, Jr. and Chandra Wilson. Which is to say, rather than needlessly allow the news to leak mere weeks ago that the original series stars had all inked new 2-year deals to return to the show — and in the process eviscerate much of the suspense surrounding the finale — the season could have ended off on a far more ambiguous, not to mention compelling note. A horrifying and heartbreaking one that would have not just kept GREY’S ANATOMY on the tip of every fan’s tongues all summer long, but helped to create the kind of marketable September event that has been missing from Network television since the heydays of “Who Shot J.R.?” (Or, for our slightly younger readers, “Who Shot Mr. Burns?”). We’re just sayin’