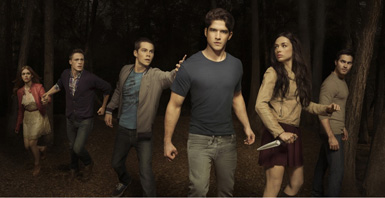 MTV’s supernatural werewolf series TEEN WOLF does not shy away from it two biggest draws: showcasing its sizzling hot young actors and a willingness to embrace the pure horror of the genre.  Wanting to explore the darker side of werewolf lore, there is blood, guts and gore as the werewolf world is not a safe place to play.

Last year, Scott McCall (Tyler Posey) awoke one day after being bitten to find himself changing in ways he never imagined.  It was a season of discovery and revelation as Scott found himself caught up in a centuries old blood feud between hunters and werewolves — or in his case, a vicious, crazed Alpha seeking to expand his pack in order to be invincible.  Season one also introduced us to Scott’s world populated by the girl he loved, Allison Argent (Crystal Reed), who unknowingly was raised by a family of hunters; his best friend Stiles (Dylan O’Brien), who thought the werewolf transformation fascinating; Derek (Tyler Hoechlin), a lone werewolf seeking to keep Scott from harm and seeking vengeance on whoever murdered his family; and the school’s “It Couple” Lydia (Holland Roden) and Jackson (Colton Haynes), who could not avoid the vortex of violence swirling around them all.

The season ended with Lydia bit and lying in a hospital bed with Stiles anxiously awaiting whether she would turn into a werewolf; Derek having killed the Alpha becoming the new Alpha in town; and Scott’s secret revealed as Allison and her father had seen him transform.  This was a blessing and a curse as Allison stuck by Scott’s side, but her father is an unknown element.  Will the Argent call of duty compel Chris Argent (JR Bourne) to ruthlessly track down Scott and kill him, or will he turn a blind-eye in unspoken support of the young lovers?

Scott never wanted the werewolf bite and certainly reviles being a werewolf.  His goal is to find a cure — a way to break the curse and live a quiet life with Allison.  Alas, fate is cruel and has other plans; and so does Derek.  An Alpha is only as strong as the many numbers in his pack, and the second season explores the deadly world of what happens when there are too many werewolves around attracting attention.  The blood feud heats up as more hunters are drawn into the battle — and they show no mercy.

The first episode of Season 2 sets the stage for another action-packed, surprising season infused with chills and thrills.  It starts off right were we left our heroes, as we wonder: Will Lydia’s bite turn her into werewolf?  Did Jackson get his wish-come-true and did Derek give him the werewolf bite that he craved?  CanS cott avoid having a bulls-eye painted on him in the looming war?  Will Allison stand by Scott as the tension builds and family duty calls? And will Derek end up being as ruthless as the former Alpha in his desperation to survive and protect his pack?

As the season continues, we will also meet the new recruits and faces around town, which includes Erica (Gage Golightly), a young woman looking for a miracle; Danny (Keahu Kahaunui), a fellow lacrosse teammate who already struggles with self-identity; Matt (Stephen Lunsford), the classmate with an agenda and too much curiosity for his own good; and Isaac (Daniel Sharman), a teenage loner looking for a way to belong in world that feels hostile at every turn. Then who is the mysterious Boyd (Sinqua Walls), a newcomer to town, and what terrible secret is he hiding? There’s also the return of Gerald Argent (Michael Hogan), Allison’s grandfather, who everyone seems to tremble before.  He will test the theory that family bonds are stronger than the lure of love.

At a recent event celebrating TEEN WOLF at the Paley Center, the cast took a few moments to chat on the red carpet about what’s next for their characters:

Finally, one last teaser, with whispers that there may be other supernatural beings hiding in the darkness, the question is not if they will strike, but when — and who will be left standing once they do?  Life in Beacon Hills is about to get a lot more complicated and explosive!

TEEN WOLF returns with part 1 of its second season premiere on Sunday, June 3rd at 11PM and continues in its regular timeslot with part 2 on Monday, June 4th at 10PM on MTV.