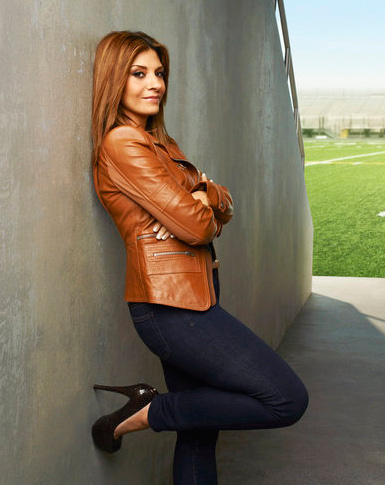 The world of Dr. Dani Santino is about to get a lot more complicated in the second season of USA Network’s sports drama.  After last year’s shocking finale in which star football receiver Terrence King was shot by a crazed fan,  Dr. Dani must find a way to get inside T.K.’s head before he completely implodes and then explodes.  At a recent set visit, star Callie Thorne briefly previewed what to expect in this next season and the challenges that Dr. Dani’ faces.

It looks like Dr. Dani has a very full season ahead when the season kicks off.  Can you talk about getting ready for this second season and some of the fine-tuning that went on?
CALLIE:  That’s a good question about getting back into it because we did have a nice long hiatus and it is always a little nerve racking coming back into a show – and before this I didn’t have so much to think about.  This was the first time coming back into the second season of the show being number one on the call-sheet. I was very nervous about that.  We luckily had about a week before we started shooting, which was little bits of rehearsals, little bits of fittings, and so the guys and I got to play and talk and hang out and we all just naturally fell back into our roles.  It really made the first few weeks of work that much more sort of giggly and fun.  Because really I think what we all respond to the most is laughing with each other — even if it’s dramatic scenes or silly scenes.  That’s how we get into it with each other and I think that shows up on screen.  So it was very smart for them to have us come a week ahead of time.  Then in regards to Dr. Dani, especially that first script coming back — there’s so much going on.  But everything was so wonderfully detailed.  It made it easy for us to slip back in.  I also really liked the fact that it wasn’t like a year later.  It was sort of really a perfect time to come back. The audience wasn’t struggling to remember what happened, nor were we struggling to establish things that happened – having to do expositions, and stuff like that.  It was all right there. So I have to say it was easier than I thought.  But mainly because we all laugh a lot and we’re able to make those connections again very easily.

How does Dr. Dani help T.K. get through his PTSD this season?
CALLIE:  Well, it’s even sort of questionable when we come back if Dani’s really helping him at that point.  Because he thinks of her in this maternal way, which I think kind of backfires a little bit when we come back to that.  Because now it’s almost like he’s rebelling as a child or a teenager.  He isn’t accepting what really happened to him.  He’s in this sort of state of denial and that makes their relationship really difficult.  She can’t get through to him.  So it’s interesting because I have thought of it more in terms of a mother kind of trying to get through to their child — to sort of try any which way to get him to admit what happened.  Because as wild as T.K. was last year, he’s a wild and, and sort of extraordinary character, he’s even more so when we come back — but not for the best reasons.  So I think it’s really interesting the first few episodes watching Dr. Dani trying to get in there any which way and he’s not taking it.  He’s really not working with her at all and that’s new.  I think that is a new place to find them and then you’ll see what happens — if that’s good or bad for anybody.

Where do you think Dr. Dani gets all her strength from?
CALLIE:  I love that.  Because a lot of what I bring to the character myself is a lot of my own mother.  I grew up with a single mother, so there’s a lot of tone and behavior that I think of in terms of my own mom as well as the woman that the show is based on [Dr. Donna].  The character is based on a very strong woman. I’ve always said:  she’s this force to be reckoned with.  That is in the writing because she is in the writer’s office.  She’s always there to be a part of what the particular patient of the week storylines is.  She’s also there to make sure that the character is very true to herself and the circumstances that she has been in now that we are now bringing her life to the screen.  Then I’m also thinking about my own therapist in real life.  All three of these women are all incredibly independent.  All are women that I’ve learned extraordinary things from and still do.  So I think that that has a wonderful mix with the way the writers write Dani.  So it also sort of falls into place -= these are the women I have in my mind and the way that they write her.  It’s a very strong voice.  Sometimes you’ve got an enormous amount of homework to do in order to bring a woman like that to life.  In TV it’s changed in the past few years because there’s so many incredible lead women now and they’re very layered, and some of them are likable and some of them are not.  That’s what women are.  We’re many different things.  So I got all that going on and then I have the luck of good writers that are creating this woman with me.

What sorts of insights have you gotten from the real Dr. Dani?
CALLIE:   One of the things that’s really hard for me as Callie is doing a lot of the therapy scenes.  You see someone in pain — in emotional pain — and my natural instinct and I think a lot of people that I know if you have a heart that your instinct is to feel for them.  I want to go and give them a hug or I want to go, “Oh my God, I know!” or whatever it is.  What the main thing I’ve learned from Dr. Donna is that place that you have to go to that neutral place.  So that you can be a safe haven for that patient — a place that they can be honest, not feel judged, not feel like they have to impress you or whatever it is.  So even as an actor I’m learning some things about how she’s got to present herself as a therapist.  It helps me as an actor just sitting in these scenes.  You’re so used to reacting as an actor and that’s what you’re taught in every class.  Acting is reacting, but especially in those therapy scenes I have to go to a certain headspace.  To not give too much away and let those scenes really be about who I am with the patient and let them tell their story.  So I think that’s the biggest thing I learned from her in regards to the character. Then in my life I’ve very much learned from her.  It’s a theme in the show as well, that sometimes people just want to be listened to and it was something I spoke a lot about last year too — that I have learned to be a better listener because of my conversations with her.  I found myself babbling with her, talking, sometimes we talk by Skype and I’m going on and on.  I feel so great afterwards and I realize she didn’t even say anything.  She just listened to me. She didn’t try to fix me.  She didn’t try to make parallels and say, “Oh, I know because this happened to me” and that’s very meaningful to me.  So those are the two things that I am very grateful for that I learned from her.

What are some of your favorite scenes or storylines of stepping outside of the football arena?
CALLIE:  My first favorite is what happens in the second episode, or maybe it’s the third.  They get tangled.  But it’s the roller derby episode.  For several reasons: I was really excited that we were focusing on female athletes; then roller derby’s always something that I’ve always loved watching.  There was the girl I met three or four years ago and she was an actress who, on her off time, was this very famous — I think they’re really called the New York Dolls — I’m not even sure, but she was a very famous New York roller derby girl and she had stories that blew my mind.  So that was very exciting to me.  That they created for the show they created a roller derby arena and they did it very beautifully, and they got a real team together.  That was Rob Morrow’s episode and, I think because he’s an actor, they got a little bit more into that sort of stuff.  The actress that they cast as the girl with the issue was a real tough little cookie and she was getting really involved in it.  So that was fun for me because I got to go and sort of be in there and meet all these incredible women. These tough women, and I think that’s what I’m very excited about in regards to the second season.  There will be more stories away –leaving the football stadium, although obviously I love going to the football stadium. But that just makes it more exciting for me. 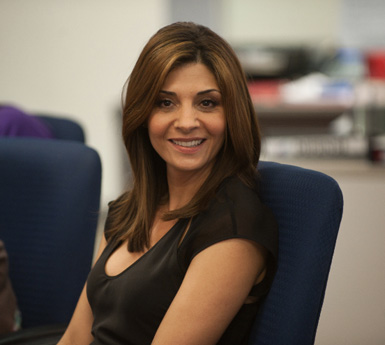 To see if Dr. Dani is successful in preventing a major meltdown with T.K. and how she dodges a whole array of other professional and personal sticky situations, be sure to tune in for the 2nd season premiere of NECESSARY ROUGHNESS on Wednesday, June 6th  at 10PM on USA Network.