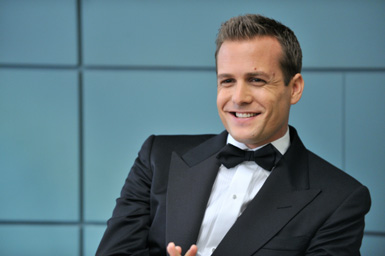 If you thought SUITS’ fantastic first season was a roller coaster ride for Harvey Specter (Gabriel Macht), well, we’ve got five words: You ain’t seen nothing yet!

Oh sure, last season had its fair share of excitement, watching Specter put his career in jeopardy after agreeing to hire Mike Ross (Patrick Adams) as an attorney despite the fact that the brilliant college drop out had never actually attended law school, let alone passed the bar. It was also just the beginning. For when SUITS’ second season kicks off, the question will be whether or not Harvey will abandon Mike to salvage his own career now that word has gotten out that his fellow gladiator in a suit may not exactly be as qualified to practice law as he appeared to be.

So just how does Spector plan on dealing with the consequences for his actions, and what other surprises does the future hold for this ridiculously talented, albeit morally questionable attorney? For answers, we went to the source himself, Specter’s portrayer Gabriel Macht to find out just that. See what he had to say during a recent visit to the Toronto-based set of SUITS for yourself, after the jump.

Harvey’s Journey
GABRIEL: Harvey’s a little bit more complicated.  I think there’s some more challenges along the way, and he’s up against these huge challenges.  I think that he’s just trying to fight even harder.  He’s got such a mentality of winning that it makes it just makes him a little bit more complicated in being easy with what’s going on.  So, I think it’s great for the character. . . There is a scandal. Travis Tanner from the first season comes back.  He sues the firm, and he tries to sue a General Motors-type car company. There’s some information that may have been buried. So Harvey’s been involved not once but twice in burying some evidence and that comes into question.  But the truth is he didn’t bury it.  It was looked over.  But it does set this huge sort of house of cards to sort of crumble, which is great for the dramatic purposes of the show.

Harvey’s Mask
GABRIEL: Harvey’s always confident. I think I also think that underneath, deep inside, there’s a lot of insecurities that Harvey’s got, and that’s part of the reason that he’s sort of overconfident.  That’s sort of how he feels like he gets things done.  But [this season] he comes up against a lot of challenges that shakes his confidence.   I think he’s a guy that really does believe in presentation, and to protect his clients and to protect his streak, he sort of puts up that front. So maybe when his family comes into question, or see where he comes from, we can peek into why he is the way he is.  I look forward to that.   There are times though I think in his relationship with Jessica, where some of the mask sort of falls, and you see a bit more of his insecurities.  I don’t think he tries to let anybody else see it.  Donna, I think sees it.   We’re gonna see some really, really interesting things happen with Donna’s character, and some of their past, and how she makes her successes and her failures along the way, which is gonna be really quite dynamic.

Harvey’s Thoughts on Mike & Rachel Romance
GABRIEL: I think Harvey doesn’t really care.  Here’s what he does care about: he does care that Jessica knows and he cares if anybody else in their law firm knows.  So if Mike picks Rachel, he’s gonna have to lie to Rachel, or he’s gonna have to end that relationship.  There’s no two ways about it.  So I think Harvey feels like, “Do what you will.  If you want to continue dating this woman, go ahead, but you’re just gonna have to keep lying to her.”  I think that’s how he feels.

Harvey’s Trust
GABRIEL: The funny thing is I think Harvey trusts Mike more than anybody else.  Whether or not he tells him that is another story.  But I think it’ll create a lot more interesting moments for the show and when he is able to reveal a little bit more of himself.  I look forward to that.

Harvey’s Moral Line
GABRIEL: I truly believe that Harvey’s moral through line is really strict, and I think he has a really honest, straight moral ground.   His ways and his means of getting what he needs to win a case, or to protect his client is rogue and it’s completely alternative.  But I think underneath everything he stands for what’s right.  So that’s what I think makes him so heroic in so many ways.

To see how Harvey handle the pressure of facing off with Jessica over Mike, as well as the looming investigation into allegations of misconduct be sure to tune in for the premiere of SUITS on Thursday, June 14th at 10PM on USA Network (Monday June 18th at 8PM on Bravo in Canada).  You think you know Harvey, but do you really?