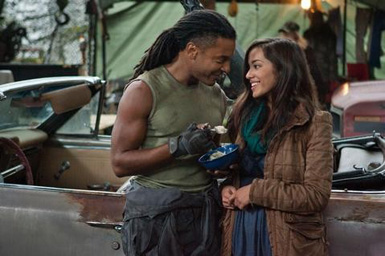 In the three months since Tom Mason went M.I.A. aboard the alien mother ship, the ragtag group of freedom fighters known as the 2nd Mass have been forced to find a new faces. One such face is Jamil, an engineer with invaluable technical and practical knowledge that the 2nd Mass will most certainly exploit and put to good use. We recently had the pleasure of catching up with his portrayer, Brandon Jay McLaren to find out what it’s like playing the new guy and how his character fits in to the FALLING SKIES world this season.

Can you talk about how you were approached and cast in the series as Jamil in FALLING SKIES?
BRANDON:  I was in Los Angeles and my agent in Canada actually found the character and asked me to throw an audition on tape. So I sent it up and forgot about it and then 3 weeks later, they were like, “Okay, you’re flying back to Vancouver in two days.”  It was very fast.

Was there anything that made you think “Oh my god, that’s going to be a cool series” or about the role?  What jumped out at you?
BRANDON:  I had met Drew Roy about a month prior, but I had never heard of the show before as he was telling me about it.  But it sounded very cool.  So when this came across, I was like, “Oh, that’s the same show that Drew was talking about.”  So I watched the first season and I was like, “This is great.”  And Steven Spielberg is the executive producer, which is always very exciting.

What can you tell us about Jamil?  What can you share about his involvement with the 2nd Mass and the fight against the aliens?
BRANDON:  Jamil met up with them through their travels and he stayed on with them because they were like a sense of security for him.  What we know is he was about to start an IPO before the aliens came, so the 2nd Mass uses his technical abilities to kind of fix everything that needs to be fixed.  He also handles all the explosions.  He fixes the vehicles.  He makes sure that everything on the technical side is running smoothly.

Did you actually get to work with the explosions or did you stand far back when they were doing all that?
BRANDON:  [Laughs] Hey, I was in video village watching.

What about fight training?  Did they have you pick out weaponry and do some training?
BRANDON:  You know what? Jamil doesn’t do any fighting.  He is not out on the front lines.  He’s the brains, so they have him back in the back.  He doesn’t shoot guns.

Wow, I can’t even imagine that.  That show involves everybody on the front lines.
BRANDON:  I know! I know.  I was always like, “When am I going to get to shoot?” And they were like, “No, Jamil is fixing the guns.  He’s not shooting the guns.”

He’s building the bombs or something along those lines.
BRANDON:  Exactly! Or repairing bridges, or something like that.

So now that you’ve played Jamil for an entire season, what about him do you most admire?
BRANDON:  He’s in over his head a bit and he’s asked to do a lot, and despite the fact of being a bit overwhelmed by the situation and the responsibilities that they’ve placed on him, he always kind of pulls through.  So he has that kind of resiliency that I really like about him.

Who does he really work with most on the show?  Is he kind of Tom Mason team or is he aligned along the lines of Team Pope?
BRANDON:  He’s not with Pope.  He’s actually more with the Captain (Will Patton).  That’s his sort of go-to guy to make sure that everything is in place in terms of when they move to different locations that the vehicles are ready, all the bridges are secure, any sort of entrapment plans that they have for the aliens, he looks to Jamil to sort of set it up and make sure that all the plans are followed through.  Definitely not Team Pope.

Does Jamil have any thoughts about the fact that these kids came back and they could still pose a threat, or does he just accept that if everybody is okay with that then he’s cool with it?
BRANDON:  He’s kind of accepted it.  Like I said, he’s just trying to fit in and find his place with the group, and he sort of found it with the jobs that they give him.  He’s also fond of Lourdes and they have a little thing going.  So that’s kind of Jamil’s focus.

Is there a romance brewing?
BRANDON:  There’s a little something-something there. Yeah.

That sounds promising!  Sometimes it feels like FALLING SKIES doesn’t allow for much romance because they’re always fleeing these horrific aliens.
BRANDON:  Yeah, that was the great thing about this season.  They went into the personal stories as well as having all the chaos going on outside.  So it’s a nice balance this season.

What did you appreciate the most working not the second season?
BRANDON:  That they were really able to sort of blend this really chaotic, antagonist alien presence with these real personal stories.  It really makes you want to learn about these people more, not just focus on explosions, guns and action, but the personal stories inside all that.  That’s really what I liked.

What did you think when you first saw the Skitters, the Mechs and all these aliens?
BRANDON:  I remember when I watched the first season, I was blown away.  I was like, “These look great.”  You could tell the Spielberg influence in the quality of the aliens and the action shots and the Mechs.  It all looked feature film-esque.

So what do you think is Jamil’s mind-set?  What’s Jamil’s kind of goal?  Is there something going on with him that we should keep an eye out for?
BRANDON:  Nothing that I could say.  [Laughs]

Ah, a mystery!  Okay, what about challenges?  The second season filmed during the winter up in Vancouver.  Was there other sorts of things you had to deal with?
BRANDON:  There was a lot of night shoots, which means a lot rain. But with those kinds of shoots, there’s always something going on.  You’re always running from something or something’s blowing up.  So those nights go by pretty quick.  It’s very active.  Those are big shooting nights.  It wasn’t too bad.

FALLING SKIES is a big scope of a show, with a lot of location shoots.  Are you looking forward to doing more work during the daylight and in a studio now?
BRANDON:  I don’t mind location.  In fact, I just came off a pilot for USA Network called GRACELAND, which shot on location in Venice Beach in Malibu and that was great.  So location can sometimes be amazing.

Looking towards the third season of FALLING SKIES, and assuming you’ll have time, where would you like to see Jamil’s story go?
BRANDON:  I would like to see him fight more.  Maybe that would be cool.  Like I said, I was chomping at the bit to get a gun and use it. And the love story with Lourdes, I would love to see that go further as well and see what happens with that.  ‘Cause it’s nice when you still have time for love in all that craziness.

Finally, what would you like to tease that fans should look out for this season?
BRANDON:  There’s a great storyline with Tom and his sons.  To me, that was the most compelling. So just to see how those relationships change over time and how the middle son kind of grows older and how Tom and Drew’s character deal with that.  I found that was really, really interesting stuff.

Is there one moment that fans should look out for, maybe like holding their breaths?
BRANDON:  [Laughs] I’m not going to say anything.  It’s all “top secret”!

Clearly, there is a lot more going on with Jamil than could be revealed. But the mystery of Jamil and what he is really up will be a fun treat to watch unfold as the second season of FALLING SKIES continues.  So be sure to tune in for the 2-hour premiere of FALLING SKIES on Sunday, June 17th at 9PM on TNT.