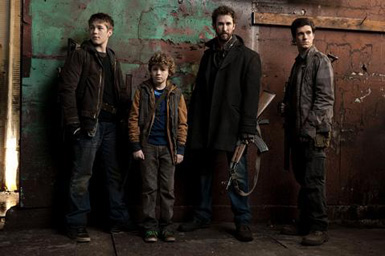 On the off chance you’ve missed the cornucopia of articles and interviews we’ve recently posted touting FALLING SKIES much anticipated return tonight, theTVaddict.com’s look at closer season two continues with a peak behind-the-scenes of what goes into the creation of the show’s special effects, and a few more thoughts from stars Noah Wyle and Drew Roy.

On Tom Mason’s Return
NOAH: Walking onto the ship proves to be a really horrible decision and one that he regrets for most of the second season. He is then let off inexplicably far from where the 2nd Mass is and has to make this pilgrimage to get back to the group. And all the while, he is wondering and plagued with questions about why they let him go and if he does find the group, does he pose a security risk? Is he going to be a liability? Has he been changed somehow? What’s he going to find when he does find them? Will his kids still be alive? Will Anne still be alive? Is there still a 2nd Mass? So he feels very isolated and very much alone. They have to find that trust again.

On Hal’s Mindset During Tom’s Absence
DREW: We just have to keep moving forward. We have dealt with tough situations in the past — you lose people and you want to hold onto that hope that they’re still there but since 3 months have gone by and we haven’t seen or heard anything from Tom, you just have to start putting it behind you and building yourself back up and taking care of the people you still have and keeping those relationships going and not letting all that stuff hold you down. ‘Cause when you’re out there, you’ve got to be on alert. You can’t be distracted by these things.

On What Exactly is Going on Ben
NOAH: When we last saw Ben, the harness had been successfully removed, but it still had some residual effects. It was mutating him in an odd fashion. So when we meet him this season, he’s a completely redefined character. He’s got more physical prowess. He has almost an ESP sense of where to find the aliens and how to dispatch them. He’s become a very effective alien fighter. And he’s got a lot of misgivings and awkwardness about how he relates to the other people in the group. While he serves a very valuable purpose, he also serves as a reminder that he is not quite human and we don’t know where this evolution is going to lead us. And that becomes one of the dominant themes of the second season. His character in particular becomes a dominant theme.

On the Fight With the Aliens
DREW: We just don’t have as many people. We’re on the run. We don’t know our surroundings as well. And the aliens are hunting us down now ’cause we have pissed them off. So they come back with some vengeance.
NOAH: There’s no room for ambiguity anymore. When Tom gets off the space ship, he realizes there is no peace to be brokered. No negotiation to be had. And there is no future for anybody until this threat has been eradicated or lifted. So nobody’s harboring any sense of hope any longer. It’s a fight to the last man on the last stand.

With that preview into what Tom, Hal and Ben will be struggling with this season, here is a special demonstration of the special effects used to bring the Mechs, Skitters and Overlords to life on the series:

FALLING SKIES returns for its second season on Sunday, June 17th at 9PM on TNT. See exactly what Tom Mason endured on that alien space ship and how it haunts him — and remember some nightmares are real.